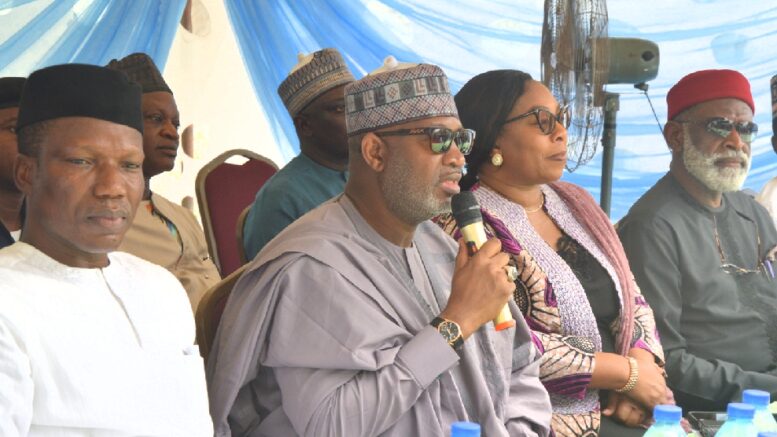 Barely hours after the Aviation Minister, Senator Hadi Sirika, declared that he does not see any court in the country stopping the proposed national carrier, Nigeria Air from flying, a Federal High Court sitting in Lagos has granted an interim injunction restraining the Federal Government, Ethiopian Airlines from going ahead with the execution of the proposed carrier.

Speaking at stakeholders’ appreciation forum in Lagos today, the Minister, who was fielding questions from Aviation Journalists said that that the Federal Government is going ahead with establishing a national carrier despite the subsisting suit challenging the project.

The Minister explained that stakeholders in the aviation sector and the unions had ample time to be part of the process that is about giving birth to the proposed national carrier; Nigeria Air, adding that the process cannot be stalled by a legal suit.

Sirika argued that he does not see the possibility of any court of competent jurisdiction erecting a roadblock to prevent the birth of Nigeria Air.

He added that he personally and individually engaged domestic airline operators to participate in the Air Nigeria project but that they did not show any interest.

He listed the domestic airline operators he met to include: Air Peace, Azman Air and Max Air and one of the operators said that the meeting between him and the Minister was not formal.

In his words, “I do not see the possibility that any court of competent jurisdiction will erect a roadblock to the emergence of the national carrier.

On claims by some stakeholders that they were carried along in the Nigeria Air project.

He described it as totally unacceptable and unfair for stakeholders to claim that they have not been carried along on the national carrier project, Sirika said,

“Every information or documents pertaining to the project is domiciled at the ministry of aviation and Infrastructure Construction Regulatory Commission which are driving processes leading to the national carrier,” he said.

However, Airlines operators to show their discontentment with the controversial project drag the Federal Government, Ethiopian Airlines, Aviation Minister, Attorney General of the Federation to court to restrain them from continuing to project until the determination of the case.

After hearing the application  and submission of the plaintiff’s Counsel, Nureini Jimoh (SAN), the court ordered an injunction, restraining the defendants, either by themselves, agents, privies, principals, or any other persons whosoever from executing the proposed, or draft national carrier establishment and an agreement by the Federal Government of Nigeria.

The Court in a suit filed at the Federal High Court, Lagos Division  by Azman Airlines, Air Peace, Max Air, United Nigeria Airlines and Top Brass Aviation which are the plaintiffs sort perpetual injunction restraining the defendants (Nigeria Air, Ethiopian Airlines, Aviation Minister, Hadi Sirika, Attorney General of the Federation) their agents, servants, officers, privies, and principals from perfecting, continuing and transferring the operations of Nigeria Air by the 3rd and 4th Defendants to the 2nd Defendant.

In a suit filed by their counsel, Nureini Jimoh (SAN), the plaintiffs declared that the action, conduct, and or decisions in the sale of the shares and operations of the 1st Defendant (Nigeria Air) is in violation of the Companies and Allied Matters Act (CAMA) 2020, SEC Nigeria Consolidated Rules & Regulations 2013 (as amended in 2022), Nigerian Investment Promotion Commission (NIPC) Act, International Civil Aviation Organization (ICAO) Convention, Civil Aviation Act, Public Procurement Act, Concession Regulatory Commission (Est.) Act, 2005, Federal Competition and Consumer Protection Act, Procurement Processes for Public Private Partnership in the Federal Government under the National Policy on Public Private Partnership (N4P) and Nigeria Civil Aviation Regulations, 2015, and other regulatory statutes on aviation, companies, and investment laws in Nigeria.

The plaintiffs equally   declared that the entire administrative actions and decisions of the 3rd (Sirika) and 4th Defendants (Attorney General of the Federation) in the sale of the shares of the 1st Defendant to the 2nd Defendant and its consortium is invalid, void, and of no effect.

They equally declared that the 2nd Defendant (Ethiopian Airlines) was incompetent to bid for shares in the 1st Defendant and commence business accordingly.

The plaintiff prayed the court to set aside the entire bidding/selection process(es) for the “Nigeria Air” project as well as the approval, grant, or selection of the 2nd defendant by the 1st, 3rd, and 4th Defendants in the process.

The Plaintiffs prayed the Court to order for the immediate, fresh, and transparent bidding process(es) involving the plaintiffs being the indigenous Airline Operators in Nigeria(AON) rightly entitled to participate in the process.

·                    An order directing the immediate revocation and cancellation of the Air Transport License (ATL) issued by the Nigerian Civil Aviation Authority (NCAA) to the 1st Defendant.