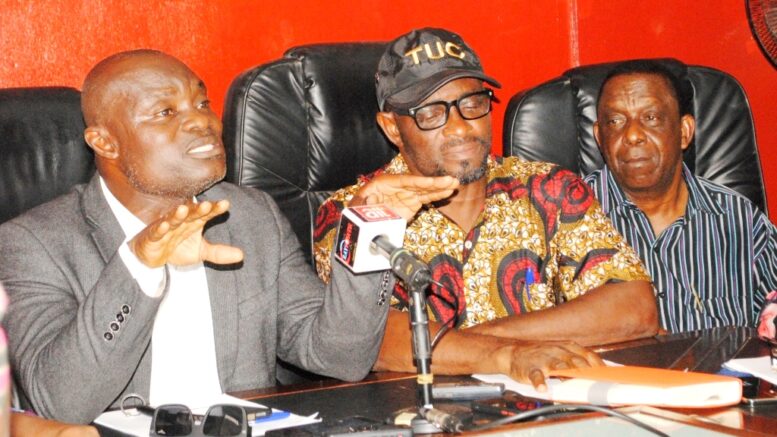 …We Did, BASL Replies

The Air Transport Services Senior Staff Association(ATSSSAN) has urged the management of Bi- Courtney Aviation Services(BASL) to follow due process and carry out its action in accordance with the agreement it signed with the union as regards sacking of  34 of its members.

This is just as ATSSSAN said that BASL has no right to take a unilateral decision in the process of sacking the 34 members.

ATSSSAN General Secretary Frances Akinjole, who briefed Aviation Correspondents on the difference between BASL and the union, said that the affected workers who are members of the union were sacked for expressing their opinion to join ATSSSAN.

He also alleged that the union members were harassed and intimidated to frustrate them out of the BASL, adding that since all that did not work, the management of BASL decided to sack them without following the procedure for laying off workers.

He added that BASL management also used the year by year method to calculate the affected workers exit pay, a method Akinjole decaled is unacceptable to the union.

The General Secretary posited that a series of meetings were held with BASL but that ATSSSAN discovered that BASL was not ready to cooperate with the union.

To buttress his point, Akinjole said that of the 7 Exco members who are union members of the union, 4 were given termination letters by BASL, a situation he said should not be.

He said that in view of the above, the union gave BASL seven days’ ultimatum to reverse the decision of members that were placed on a compulsory 10-day leave and settle their exit pay, BASL responded with termination letters via the emails of the affected staff.

The letter, he said, showed that BASL was never ready to address the issue.

Speaking further, the ATSSSAN General Secretary said that the Airport Commissioner of Police intervened in the matter but that just as the unions left the CP’s office, BASL started issuing indiscriminately to union members.

He pointed out that what BASL did by issuing sack letters to union members is a breach of the agreement it entered into with the union, adding that in 2021, it signed Condition of Service(CoS) with BASL but that today the company is terminating the appointment of members of ATSSSAN without recourse to the union.

According to him, “Due process was not followed in the termination of union members by BASL.  All the organs of ATSSSAN will be meeting to review the issues on ground.”

Also speaking, the Deputy President, Comrade Emmanuel Jaja said, “ATSSSAN is not against any employer in doing whatever they want to do but the issue is, you want to downsize, right size, redundancy but because of the agreement we have courtesy demand that you should call us, let us sit down, we cannot say no, the issue is that you should go back and follow the due process.”

He contended that ATSSSAN is not against BASL but it must discuss with the union if it wants to downsize, retrench as the case may be. But what the union will not accept is laying off its members without following due process.

Responding in a statement, BASL said that it has complied with all laws of Nigeria regarding issuance of compulsory ten days leave of absence to branch executive officers and members of its union in BASL

“We have complied with all laws of Nigeria-BASL” it said.

The firm in s statement yesterday said it has always been very dutiful towards its staff, stressing that facts are sacrosanct.

The management explained that in 15 years of operations, they have always paid salaries as and when due at the end of every month.

“We have paid all allowances as and when they fell due. We have made our statutory pension contribution to the retirement saving accounts of our workers without fail. We have a health insurance scheme for our workers and their family members and we have always paid a premium as and when it is due. We also have a life insurance scheme for our employees”.

“During the prevalence of COVID-19 when all businesses were shut down, we paid a substantial percentage of salaries to our staff during the lockdown. As soon as the lockdown eased, we paid the balance of salaries to all our staff. We were informed that we were probably the only organization in the aviation industry that extended this gesture to its staff during COVID-19”.

The company further disclosed that they executed a new condition of service on June 16, 2021, adding that through the negotiations of the conditions of service, the union insisted that the document will be implemented to the letter without an iota of discretion.

BASL noted that even in the letter of the union dated September 17, 2022, the union stated that both parties are bound by the signed document.

“We totally agree with the position and are bound by the signed document. The document was signed on June 16, 2021 and in accordance with the law of the land and became effective on June 16, 2021. Going forward, we will pay the terminal benefits as provided in the agreement from that day”.

The company further disclosed that it had presented the letter of appeal to the Board of the company with the Board coming to a conclusion that going outside the agreement signed with the Association would be unlawful.

“It may expose us to litigation from stakeholders in the venture. The Board has warned against making payments that are not within the law of the land. We continue to be available to work harmoniously towards creating a conducive atmosphere between the Board, management and members of staff”.