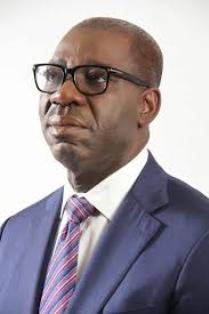 The Edo State Governor, Mr. Godwin Obaseki, has approved the sum of N1.87billion for the construction of a forward operating base for the Nigerian Army, in Ehor, Uhunmwode Local Government Area and other projects in the state.

The Edo State Commissioner for Orientation and Communication, Andrew Emwanta, disclosed this while briefing journalists after the weekly Executive Council (EXCO) meeting chaired by Governor Obaseki, at the Government House, Benin City.

Emwanta said the governor also approved the development of a detailed master plan for a new town layout in Ward 9, Ikpoba-Okha, and the sustenance of the ‘Operation Light Up Edo Project’ as well as the extension of the Ossiomo Independent Power project to some strategic public utilities.

He said the preparation of the detailed master plan for a new town layout will include the design of roads and other infrastructure; the ‘Operation Light Up Edo Project’ will ensure the lightening of more streetlights across the state, while the extension of power will cover three public facilities including the Government Science and Technical College, the Edo State Ministry of Education in Iyaro, and Edo Broadcasting Service (EBS), at Aduwawa.

The commissioner said the contract for the master plan will cost N750million; the forward operating base is budgeted at N646m, while the ‘Light Up Edo Project’ and extension of Ossiomo power to the public facilities will cost N476 million.

“Three memos were received, deliberated upon, and approved at the EXCO meeting today.

“The first memo was an approval for a detailed master plan for a new town layout in ward 9 in Ikpoba-Okha LGA of the State. It was presented by the Ministry of Physical Planning, Urban and Regional and Development and the contract is worth N750 million.

“The second memo was for the construction of the forward operating base of the Nigerian Army, in Ehor, Uhunmwode local council. This is part of the Edo State Government’s support to the Nigerian Army to stem the problem of insecurity in that axis. The EXCO approved the construction of that forward operating base for N646 million.

“The third memo was for the ‘Operation Light Up Edo Project’ and to extend power from OSSIOMO Independent Power Project to some strategic public locations, namely: the Government Science and Technical College; the Edo State Ministry of Education in Iyaro, and the Edo Broadcasting Service (EBS) at Aduwawa. Also, to light up some areas in Benin City with street lights and the amount for the project is N476.7 million,” he said.

Be the first to comment on "Obaseki Approves N1.87B For Construction Of Army Operating Base In Ehor, Other Projects"