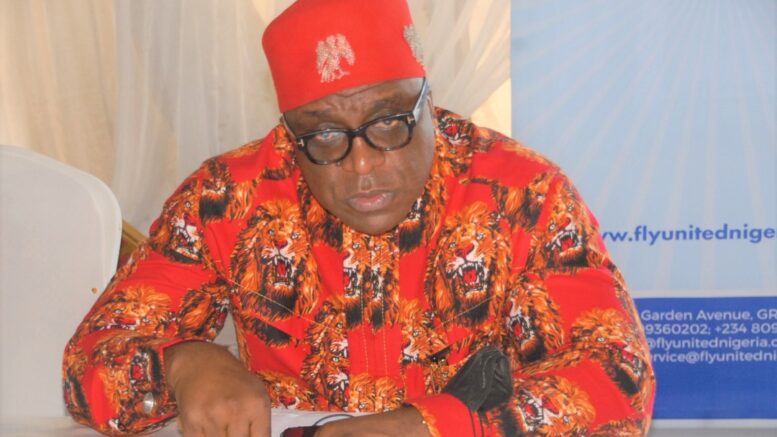 As the rate of youth unemployment continues to rise in the country, the Chairman of United Nigeria Airlines(UNA), Dr. Obiora Okonkwo, has advised both the Federal and State Governments to utilise the Igbo apprenticeship system to address the challenge.

Okonkwo gave the advice while delivering a keynote address at the 2022 edition of the All Market Conference, organised by the Ndigboamaka Progressive Traders Association in Lagos today.

The UNA Chairman pointed out that the Igbo apprenticeship system has the capacity to gather the army of unemployed youths and engage them meaningfully.

According to him, the Federal and State Governments have the capacity to enter into agreements with traders and other tradesmen to provide tutelage to youths and reduce unemployment in the country.

The scheme that had proven to be a success among the Igbo people over the years had also helped in creating wealth, can be replicated across the country with the government providing the needed guarantees for startup funds. Lagos State Governor Babajide  Sanwo-Olu unveiling the  new logo  of the Ndigboamaka Progressive Traders Association while, the UNA Chairman , Dr. Obiora Okonkwo and other dignitaries at the event watch with rapt attention .

“I call on governments across Nigeria to explore the benefits of the apprenticeship system practiced by the Igbo people and use it to address youth unemployment and fight criminality.

“What it takes is a policy on the placement of willing youths in businesses that will take them through tutelage for a period of time while the government empowers them with startup funds upon completion”, he said.

He contended that unemployment has become the biggest contributor to insecurity across the country adding that for the government to effectively tackle the situation, it must begin to think outside the box to see other ways of addressing the problem.

In his words, “When youths are meaningfully engaged they rarely have time to engage in criminal activities”.

He added that Nigerian youths are attainable and that providing guarantees for startup funds will be a much needed incentive to encourage youth participation in apprenticeship. Okonkwo, who in 2020 instituted a research at the Nnamdi Azikiwe University Business School into how to revitalise the Igbo apprenticeship scheme and reposition it to become the new model in tackling unemployment, said the report of the study, which was publicly presented in October 2021, should form part of working and policy document of government on addressing unemployment in the country.

“In October 2021, the report of the study which I instituted at the Nnamdi Azikiwe University Business School into the Igbo apprenticeship scheme was presented at the university in Awka.

“The report made far reaching recommendations on how to reinvent the scheme and position it as the new framework for addressing unemployment in the country.

“I therefore believe that it has now become necessary for governments across the country to obtain copies of the study from the university to see how they can tap into the recommendations to develop new policies that would help them to tackle unemployment and secure our states”, he stated.

The airline operator also called on traders and tradesmen across the country to open new avenues of partnership with governments in order to make the scheme work.

“Traders and tradesmen must also be able to help government by opening themselves to this new idea and make the scheme work so that together, we can all address unemployment which has fed insecurity across the country”

“By agreeing to work with government to train our youths in trades and skills, you would be aiding the process of ending unemployment in the country. My idea is that while you train our youths over some incentives, the government can guarantee to provide startup funds to enable the apprentices to become self-employed. That will go a long way in reducing unemployment and crime in the country”, Okonkwo added.

Be the first to comment on "United Nigeria Airline Boss Urges Federal, State Govts. To Use Igbo Apprenticeship System In Tackling Unemployment"