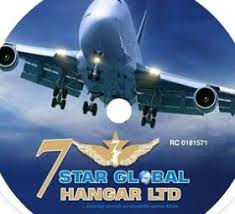 The  approval is contained in a letter from the  NCAA signed by General Manager,(ACCA), Engr. V Goyea for the Director General,Capt. Musa Nuhu.

The letter urged 7STAR to comply with all extant provisions of Nig. CARs and in particular Nig. CARs part 6, and in addition, all tasks requiring detailed, x ray and HFEC inspections.

Speaking on the approval, the elated Managing Director and CEO, Engr. Isaac Balami, who could not hide his joy said 7Star has done five C and D checks on various aircrafts with Augusta 139 8 Years Inspection (D-Check) being the first time in the history of Africa that the level will be done on that particular helicopter which he regarded as a complex new generation helicopter.

He said that the Dana Air deal will lead to the employment of 30 engineers   coand that this  consequently mean over 1,500 jobless licenced aircraft engineers will be gainfully employed if local airlines, private jet owners, state and federal governments can patronise and support this great employment initiative.

He added that with the approval on MD 83, also showed that NCAA has recognised 7Star’s worth and effort to ensure aircraft serviceability across the region.

Speaking with the Deputy Chief Executive Officer of Dana Group, Mr. Sukhwinder Mann, who made the official announcement, it was established that the decision was premised on the Dana’s Group’s pledge to the local economy whilst ensuring further development of the Nigerian aviation sector.

“I am pleased to announce that we have selected 7Star as our preferred MRO partner, the appointment will further enhance the 7Star range of MRO services to now include the MD80 aircraft range which means more jobs for the Nigerian aviation sector and potentially makes the Nigerian MRO sector more attractive to foreign carriers wishing to undertake heavy maintenance checks within the African continent. To give something back to Nigeria and reinvest in the sector gives me great pride and follows up on our key principles of Africa first.”

The appointment will see 7Star increase employment in the local community and train fresh engineers in the MD80 range of aircraft.

The 7Star CEO, Engr. Isaac Balami commented that the appointment will further boost the MROs service offering and will help to put the Nigerian MRO sector on the world map.

Similarly, Balami noted that a test flight was conducted on AW-139 some few days ago after the D-Check and the aircraft came back with zero technical fault.

“We feel happy that NCAA has recognized our effort and we know the need to comply with all the regulations and safety requirements. There is nothing like Nigerian Standard but one Global Aviation Standard which we practice with the guidance and Support of NCAA and our Technical Partners, “Balami said

He also revealed that a 20-year maintenance and inspection on a challenger 604 jet belonging to a Nigerian operator was concluded last month and this is unprecedentedly the first time in West Africa.

The 7Star boss, said the company’s management remains grateful that the jobs were being done with about 90 percent of Nigerians.

“As Africans, we are happy that we are stopping the huge capital flight and a lot of the jobless aircraft engineers that are hanging around the airport will have something doing”

Balami said having carried out more than five checks and everything was working accordingly without any query and technical issues showed that Nigerian aircraft engineers and their partners NHV were making good efforts.

He said the company was building the next generation of aircraft engineers and also transferring technology. He added that the knowledge transfer is with the support of her  sister  company, Lead Stream Aviation Training.

Meanwhile,NCAA has urged Dana Air to see the partnership with 7Star as a means of building local content and create jobs in the country through it.