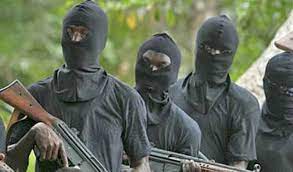 The gunmen it was also gathered disrupted flights especially that of Azman that was about taking off at that time.

The Azman flight which was initially delayed due to the attacked carried out on the airport eventually succeeded in taking off after the military repelled the gunmen after a serious gun battle.

The Acting Managing Director, Nigerian Airspace Management Agency(NAMA), Mr. Mathew Pwajok, confirmed the development but that unfortunately it led to the death of a personnel.

The Acting MD could not confirm if the agency’s installations in the area were affected, as the area for now was still under heavy military control.

According to him, “Bandits attacked our VHF omnidirectional range (VOR) equipment site at Kaduna civil airport around noon our security man attached to the equipment was shot, he later died from the gunshot wound.”

Recalled that at the same period in March 2021, gun-wielding bandits attacked the Federal Airports Authority of Nigeria quarters at Kaduna Airport, abducting about nine persons.

It was learnt that the nine abductees include a whole family of six, a housewife and her two children.

Be the first to comment on "Gun-Wielding Bandits Storm Kaduna Airport, Kills NAMA Guard On Duty"