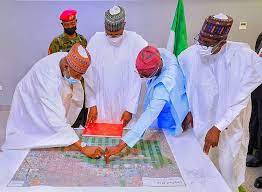 The Lagos State Government has signed an Memorandum of Understanding (MoU) with the Federal Airports Authority of Nigeria (FAAN)to construct the 9km Airport-Shasha-Alimosho link Road to ease traffic.

The construction of the ancillary road infrastructure will create seamless vehicular connectivity to the airport through Alimosho axis.

The agreement gives legal backing and concession of right-of-way for the construction of a new perimeter expressway to link Shasha Road to the Airport Complex.

The development is expected to decongest the existing Lagos-Abeokuta corridor, and reduce journey time in commuting to the airport.

The Governor of Lagos State, Mr. Babajide Sanwo-Olu and the Aviation Minister, Senator, Hadi Sirika, jointly supervised the signing of the agreement by the Lagos Attorney General and Commissioner for Justice, Mr. Moyosore Onigbanjo, SAN, and the Managing Director of FAAN, Capt. Rabiu Yadudu.

Speaking on the infrastructure MoU, Sanwo-Olu said the partnership with FAAN further testified to a new era of productive collaboration between Lagos and the Federal Government, which was not the case between 1999 and 2015.

The Governor said that President Buhari’s commitment, fairness and respectful leadership, Lagos infrastructure story had changed for the better, with the benefits emerging in terms of improved quality of life for the residents.

Sanwo-Olu who spoke shortly the MoU was signed said, “After your speech Your Excellency, we are also forming another partnership which is how do we solve access to this international corridor, how so we bring passengers going through the traffic rigmarole in Lagos, how do we make sure they have a worthy journey experience?

“That is why the partnership between the Lagos State government and FAAN representing the Ministry of Aviation is also something we are truly proud and happy to be part of. What we are about to do is about opening up other alternative routes that would bring people to the airport that would make communication and journey time into this airport delightful.”

On his part, Sirika said the development of the new terminal was to achieve an efficient and rapid transportation network, which would make Nigeria to remain a key player in the global logistical ecosystem.

Aside facilitating international trade, commerce and tourism, the Aviation minister said improved air services that would be achieved would lead to creation of jobs and boost economy.

He said that in the coming weeks there would be a partnership with the Lagos State Government on development of rail project to connect the nearby local airport to the new international terminal.

The perimeter expressway will be constructed in four phases across six local councils, with the first phase spanning a 9-km toll road from Shasha to the airport.

There will be a toll-free alternative route from Shasha towards Agege Motor Road en route airport.

The second phase of the Lagos-FAAN road project will open the airport to Northern connection on Lagos-Abeokuta Expressway.

Other phases include linkage to Egbe, Isolo, Mushin and Okota roads.

The Aviation Minister, while speaking on the Air Rail, said, “In this administration we will be constructing an air rail connection between the domestic and international airports to shorten traffic time between the two and we will be partnering the Lagos state government to see that to fruition.

“Once this happens passengers will not need to leave the terminals to catch connecting flights and be stuck in traffic in between but will have a smoother, less challenging transition and aid create the hub status the MMA has strived for many years.

Be the first to comment on "LASG, FAAN Sign MoU To Construct 9Km Airport-Shasha-Alimosho To Ease Traffic"