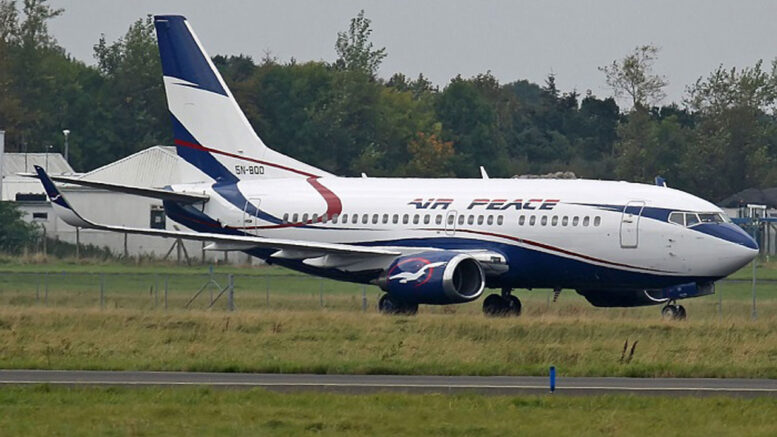 Air  Peace said the airline did not  or never disrespected the Emir of Kano as claimed by Prince Isa Bayero in a letter of complaint  he wrote to Director  General of the Nigerian Civil Aviation Authority (NCAA),Capt.Musa Nuhu against Air Peace asking the regulator to sanction the airline.

Air Peace made the clarification in a statement signed by the Air Peace,Chief Operating  Officer, Toyin Olajide (Mrs) andmade available to journalists today.

In the said letter, Bayero alleged that Air Peace disrespected the Emir of Kano and the people of Kano for not delaying our 6.15am flight to Kano for the Emir!

Rather than disrespect the revered Emir of Kano, Air Peace did everything to PROTECT THE NAME AND IMAGE OF THE EMIR FROM RIDICULE by not succumbing to what Isa Bayero wanted us to do.

If we had agreed to stop and delay an aircraft, already set to take-off, for another one hour only for the doors to be opened and the Emir to walk in, there would have been a very serious uproar in the media nationwide against both the airline and the Emir. This we pleaded with Isa Bayero to understand but he refused to accept.

How could Isa Bayero want the Management of Air Peace to stop and delay a fully boarded plane with doors already shut and aircraft already moving while our respected Emir and eight others in his entourage, including Isa Bayero, were still at the international wing of the Murtala Muhammed Airport, Lagos after arriving from Banjul?

This statement is shocking to us. We want to state the true facts herein:

From the telephone log evidence on the phone of our Chairman/CEO, Allen Onyema, Mr. Isa Bayero called our Chairman at about 5.52am, at a time he was still sleeping. From the same log, it could be seen that Isa called him again at 5.59am. This call woke him up and on seeing that it was Isa Bayero calling, he took the call. Isa told our Chairman that he and the Emir of Kano had just landed the Murtala Mohammed International Airport Lagos from Banjul, Gambia and would be proceeding to Kano same morning.  He told the Chairman to delay our first flight of the day, the  6:15 am Lagos-Kano flight for him and the Emir with  another eight persons.

It was not true that our Chairman refused flatly. He rather told Mr. Isa Bayero to give him a few minutes to call the airport to find out the status of the flight. I was the one he called. To show his desire to help, he called me immediately and intimated me with the request.

I am the Chief Operating Officer (COO) of Air Peace.  I quickly called the local airport from where we carry on our day to day domestic flight operations and was told that the aircraft had since finished boarding and was almost taxiing out.

I quickly called Mr. Isa Bayero with this information and I expressed our desire to put him, their entourage and the Emir of Kano on our 7.00am Lagos- Abuja flight and that on landing in Abuja, we would then put him on our flight going to Kano at no cost to them. Mr. Isa Bayero refused this offer; he insisted that the already taxiing aircraft should be stopped and delayed until the Emir and the other eight persons arrive from the international airport.

At this point, as stated earlier, Isa Bayero and the Emir of Kano had just landed at the international wing of the airport, this means they would still need to go through Immigration, get their baggage and, of course, clear with Customs before entering the morning Lagos traffic to get to the local wing of the airport. This would mean that the passengers in the plane ready to depart would have to wait in the plane for nothing less than an hour.

‘I calledIsa Bayero to explain the status and also to proffer a solution, which would be a win -win for both the waiting passengers and the Emir. We decided instead to fly the Emir and his entourage on the 7am flight to Abuja and then from Abuja to Kano at no extra cost

”So the decision was then to fly them from Abuja to Kano still in the morning considering the next flight from Lagos to Kano was for 7: 00 pm.

“How this became a disrespectful action by Air Peace baffles us.

“We took this decision so as to defend the image of our highly revered Emir of Kano and not as an insult as insinuated by Isa Bayero because if passengers were delayed for an hour after boarding and ready to fly and then to see the Emir and his entourage walk in, considering the pulse of the general public lately due to the complaints of delays, it would not have done justice to the image and character of the Emir.

“After explaining this to Isa Bayero, he  threatened he would incite the people of Kano against the Airline if we did not stop the flight.

“When I reported this statement to the Chairman, he did not believe me and insinuated that I may not have heard him right because Isa Bayero was well acquainted with him and could not have said such.

It is therefore to my utmost shock that we saw in the media this deliberate falsehood.

It is so unfortunate that Isa Bayero will go to this extent to portray the Chairman and Air Peace in this manner.

“We are therefore appalled that this statement would be made to incite such negativity towards the Airline.

“We make bold to say that the Emir of Kano we know would have been offended to know that a flight already going was stopped and delayed for over one hour for him.

“The Emir would never have supported that publication. He may not have even known our offers and our reasons given to Prince Isa Bayero.

“We reiterate our respects to our revered Emir of Kano ,” Air Peace said.

Be the first to comment on "We Didn’t Disrespect The Emir Of Kano,Rather We Acted To Protect His Image–Air Peace"