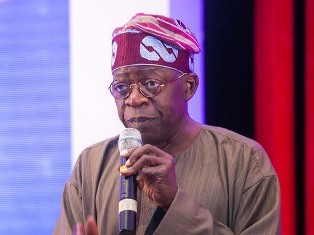 Pastor Uche Francis, the Senior Pastor of New Eden Chapel, Idimu, Lagos, has said that  the former Governor of Lagos State, Asiwaju BolaTinubu has all it takes to become the next president of the country.

The cleric, who  said  this while speaking to newsmen today Friday, urged the APC leader to come out publicly and declare his interest to contest for the position.

He said that no leader in the country is  more qualified to rule Nigeria in 2023 than the former governor.

“Asiwaju Bola Tinubu is highly qualified to rule Nigeria because of  his sacrifice, ingenuity, large heart and love for the suffering and struggling Nigerian masses,’’ Pastor Francis said.

He advised Tinubu that when elected, he should serve for only one term of four
years and handover to a young, dynamic and intelligent person from the
South East part of the country.

The cleric said that the national leader of APC has the required credentials to contest the Presidential seat, urging Nigerians to give him the needed support to ensure the  actualisation of the dream in 2023.

“Tinubu antecedent of providing leadership, ingenuity, ability to think out of the box, discovering and building talents as well as focus on human capacity development among others, eminently qualified him to lead and provide direction for the country.

“I think, without mincing words Tinubu’s antecedent of ingenuity and ability to think out of the box will put our country back on the path of prosperity.

“Nigeria needs leadership at a time like this to move forward, especially leadership that can harness both human and natural resources God has endowed Nigeria with to bring happiness to the
majority of our people.

“We need a selfless leader who understands the way to bring back
prosperity to Nigeria. We need a leader to grow our economy,” he said.

Speaking further, the the Man of God said, “We must all agree that most of the problems we are facing in Nigeria today including insecurity and secession agitations are traceable to poverty, bad economy and unemployment, hence we need a leader like him, who understands business, economy and politics.’’

Pastor Francis noted that Tinubu had done it before when he was the governor
of Lagos State, during which the Federal Government stopped allocation for the state for some years.

According to him Tinubu’s ingenuity made the state scale through those difficult moments.

“I think as we speak today, no one is more qualified than Tinubu. He has sacrificed so many of his ambitions for others.

“Providing good government is all about the ability to discover sound minds, good thinkers and competent hands to get things working which I know he is good at.’’

He  however, said that his position did not in any way present  Tinubu as a perfect human being, adding that, “Asiwaju Tinubu is an experienced leader and I am convinced that the nation needs him in the next dispensation.

“Tinubu as a patriot in words, action, and indeed, a leading light among the people, is a detribalised Nigerian with a national outlook,an accomplished politician and a seasoned administrator.

“He is eminently qualified for the position, he is a bridge-builder  across regional, ethnic and religious lines and he is capable of uniting the country.

“Tinubu has worked so hard for the nation, he is not new to global politics and will certainly apply his extensive networks to project Nigeria’s image as well as boost the economy of this Nation,” the cleric said.

Be the first to comment on "2023: Tinubu Has All It Takes To Lead Nigeria – Cleric"