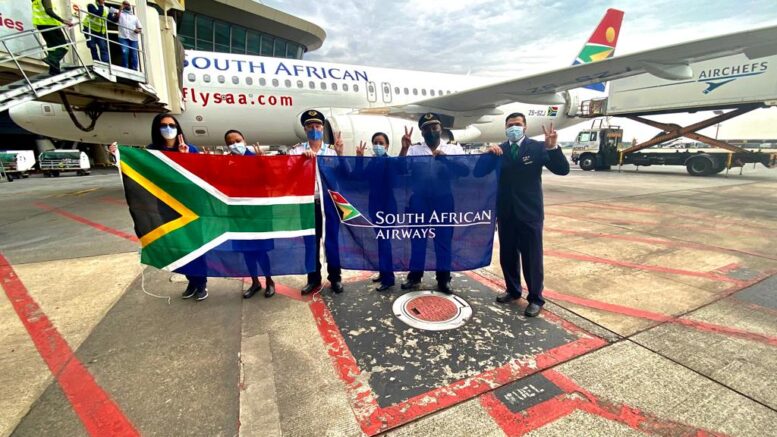 It was excitement galore at the international wing of the  Murtala Muhammed  Airport(MMIA), Lagos, as South Africa Airways  relaunched  the Johannesburg-Lagos route 18 months after it temporarily withdrew from the lucrative route.

Plans to restart the route had been on for months, as the dread outbreak of the Omicron variant of COVID-19 could not derail preparations.

As planned, the South African Airways (SAA) flight landed at 8.04 pm on Sunday at the Murtala Muhammed International Airport(MMIA), Lagos amid excitement from passengers, who hailed the onboard services offered by the crew.

To further add colour to the event, Zulu dancer were seen at the airline’s counter in Lagos entertaining passengers who came for check-in for the Lagos–Johannesburg flight.

Speaking at the occasion, the South African Airways Commercial Manager for Africa, Ohis Ehimiaghe said he was excited the same way passengers, who arrived on the flight and who were departing.

According to him, “December is a very interesting month as an airline because I recall almost 23 years ago of flying into Nigeria on Dec 3, 1998, and Dec 12, 2021, we are making a return back to the Nigerian skies after almost 21 months of not operating to Lagos”. “The flight touched down this evening and it was a very impressive flight and we were greeted with the usual water cannon by the airport authorities. It was awesome. It was very nice. It gave everybody goose pimples”.

He noted that in the face of the pandemic, Africa is opening up, stressing that South African Airways is pleased to be back to the Nigerian skies.

“Nigerians are excited to be part of the global economy as we usually say and South Africa is also excited to be part of it as well. These are the two biggest powerhouses for Africa and it can only get better. With the visit of the South African President to Nigeria two weeks ago, the relationship between the two countries is improving and it is going to be very high and we as South African Airways are part of the instrument to make investments, travels through visiting friends and families”, he added.

He further stated that they were absolutely not in any doubt that the flight would operate amid the Omicron controversies that had pitted countries and against nations which culminated in a travel ban.

“You were well aware that the Omicron variant was discovered in South Africa. Kudos to the South African scientists. Science has told us so far that the symptoms are so mild, zero death has been recorded, few people have been hospitalized. We are quite excited and we did not have any doubt that the flight was going to operate. There are absolutely no restrictions between Nigeria and South Africa. It is good for us. It can only get better”. “We do not believe that there would be another pandemic that will be worse than this. Let us be positive. Kudos to all the scientists that have been doing very hard to get us to where we are right now with the vaccines, and there will be no fear of Omicron of COVID-19”.

General Sales Agent for SAA in Nigeria, Chief John Adebanjo, who was visibly elated with the return of the carrier to Nigeria, said the Omicron variant should not be the reason to impose a travel ban on countries, adding that South Africa should be commended for identifying the Omicron variant while many other countries could not even identify it.

“From Nigeria’s end, we have competent hands that are looking into it. We raised a concern that it is just another variant and not as bad as we thought it would be and am glad because I was in the UK a couple of weeks back and the scientists are baffled that Africans are not dying from it.