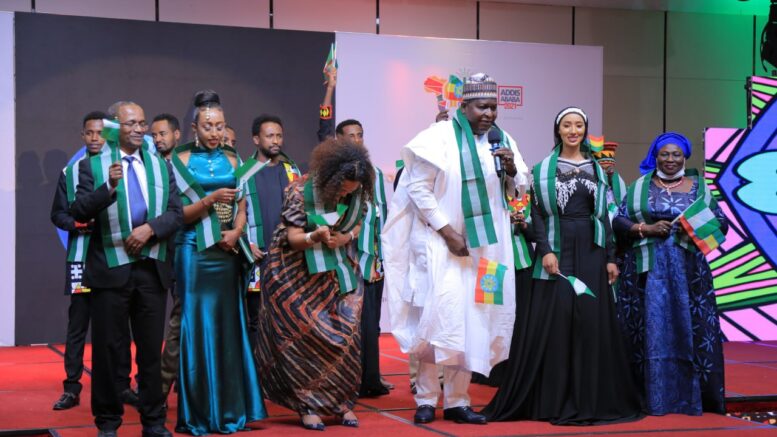 The event, which signaled the great impactful diplomatic relationship between Nigeria and Ethiopia, was part of the celebration of Africa union, formally Organization of African Unity (0AU), now (AU) born May 25, 1963 dubbed” Africa Celebrates” held in Addis Ababa, to tune up the tourism possibilities of Africa continent.

Runsewe, Nigeria’ s chief Culture officer and Director General, National Council for Arts and Culture (NCAC), drew attention of the huge crowd at the event attended by top Ethiopian Tourism Ministry officials, the tourism board big wigs and the newly established Africa Tourism Board, to the growing cordial and peaceful relationship between Nigeria and Ethiopia, nothing that an official friendship platform, would enhance the various value chain in the basket of investment opportunities in both nations.

Runsewe, who few weeks ago in Nigeria, put together a special independence cultural tourism showpiece which received Plaudits from Nigeria President and top notch members of Federal Executive Council and National Assembly, disclosed that the recent visit by President Buhari to attend the second inauguration of Ethiopian President, is reflective and indicative of the bond of brotherhood between both nations which must be sustained by the citizens of both countries through culture and tourism trade.

Egged on by the crowd of Ethiopian influencial tourism operators, and regulatory officials, with few African Tourism Bodies and personalities, Runsewe raised the Nigerian and Ethiopian flags, signaling the birth of the relationship and friendship between the two frontline black African nations.

Dancing to a multi mixed cultural music , joined by the enthusiastic crowd, Runsewe boxed up by tall and pretty Ethiopian Tourism models, unveiled the new vista to sustain cultural tourism engagements up the horn of Africa.

Witnessed by lelise DUGA JABESSA, and Nega WedaJuwerete, Commissioner and Deputy Commissioner respectively of the Ethiopian Tourism Ministry, and who thumbed up the Nigeria and Ethiopia Friendship Club initiative, stated that the presence of Otunba Segun Runsewe, in Ethiopia, will help change the culture tourism narratives of both countries, create more jobs and opportunities for the recreational needs of the continent.

Executive Chairman, Africa Tourism Board,Culthbert Ncube, also in attendance, praised the initiative and promised to help in opening such vista of relationships between African countries, noting that Nigeria must be at centre of Africa tourism equation as the biggest black population and economy in Africa.