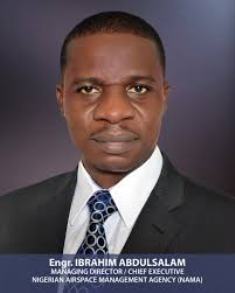 Further hearing in the trial of former Managing Director of Nigerian Airspace Management Agency, NAMA, Mr. Ibrahim Abdulsalami and six others over alleged N6. 850, 447, 609. 90 billion fraud, before the Federal High Court, Lagos was today stalled due to the absence of a counsel representing one of the defendants.

The defendants are facing a 24 count amended charge, bordering on conspiracy, fraud, forgery and unlawful conversion of funds.

The EFCC had so far called three witnesses, who includes a Zenith Bank Compliance officer, Teslim Ajuwon, one Temitope Olanrewaju and one other.

At the resumed hearing of the charges against the defendants today, Mrs. Rachel B, who stood in for Mr. Victor Opara, told the court that her principal was at Abuja, for his Senior Advocates of Nigeria, SAN, program .

Mr. Victor Opara is among the lawyers shortlisted for elevation to the rank of Senior Advocates of Nigeria (SAN) by the Legal Practitioner Privilege Committees (LPPC).

Owing to the above, Rachel told the court that Opara had written a letter for adjournment.

But the prosecutor, Mrs. Bilikisu Buhari-Bala, who led A. O. Muhammed, while not opposed to the Counsel’s request for adjournment, told the court that she was not served with the letter written by Opara.

Justice Kuewunmi, who came from another jurisdisction of the court to preside over the matter, frowned at the request for adjoumment sought by Opara and warned that such will no longer be entertained.

However, at the consent of all parties, the matter was adjourned till December 8 and 9, for the continuation of trial.

The EFCC in one of the 24 count criminal charges marked FHC/L/145C/2016, alleged that all the defendants and one Nnamdi Udoh still at large, have between January 31, 2013 and September 3, 2015, with intent to defraud and by false pretence conspired together to induced the Agency to deliver the sum of N2, 847, 523, 975 billion, to Delosa Limited, Air Sea Delivery Limited and Sea Schedules Systems Limited under the pretence that the said sum represented the cost of clearing consignments belonging to the agency.

The defendants were also alleged to have converted various sums of money amounting to N4, 003, 532, 608.90 belonging to the Agency, to their personal use.

The offences according to the anti-graft agency, contravened Section 8(a) of the Advance Fee Fraud and other fraud related offences Act, 2016 and punishable under section 1(3) of the same Act

Be the first to comment on "N6.8B Fraud: Counsel’s Absence Stalls Trial Of Ex-NAMA MD, Others"