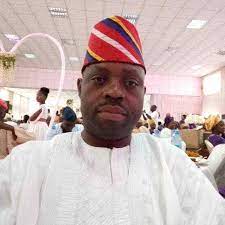 …Says We Will Consolidate On Gains So Far Made

* Address the plight of contract ATCOs at various stations and

These promises were contained in his campaign manifesto he presented in Abuja.

Speaking on the past, Agoro who is a Deputy General Manager, Aeronautical Search and Rescue(SAR), NAMA, said, that his administration inherited challenges that had direct impact on the welfare and future of individual ATCO and NATCA as a professional body.

He listed some of the issues to include: the certificate of incorporation which was re-processed by the immediate past exco, advancement of rated ACTOs from GL 9 to GL 12, ATC Scheme of Service, Condition of Service (CoS) and discouraging situation concerning the welfare of contract ATCOs.

He pointed out that on assumption of office the current administration took up the advancement issue with the management of NAMA and that the issue had since been addressed by the Aviation Minister, Senator Hadi Sirika.

According to him, “We were not deterred in our quest to get the advancement, hence we made our case to the Honourable Minister of Aviation, who graciously granted approval for the advancement of unprecedented number of eighty-four (84) ATCOs. This also involved the backdating of the commencement dates for some of the beneficiaries. We sincerely thank the Honourable Minister, the Permanent Secretary and indeed the MD NAMA for their support on the issue”.

On the ATC Scheme of Service which had lingered for so long, he stated that, the battle was won after many special interventions but  that unfortunately, some of the agreements were wrongly captured in the SoS that was sent to NAMA as the approved copy.

In his words, “We considered this as inappropriate and thus rejected in its totality, in a letter made to the office of the HOS and other relevant stakeholders. The Ministry acknowledged our protest and already had a meeting with authorities of the HOS office, where it was agreed that an addendum to the contentious areas would be made and released soon”.

Speaking on the Condition of Service(CoS)he said, “This turned out to be a major task as for the Exco because the parties involved were not forthcoming. In our own way, we were able to lay our hands on it and discovered a few but critical anomalies in it. Nothing significant was negotiated for ATC (just N5,000) while our Engineering counterparts were to get 4th and 5th ratings in hundreds of thousands. Our ATC medical allowance was given a new nomenclature which was to open it up for others to earn.  We found these detrimental to ATC and kicked against it in a well-articulated petition to the Salaries and Wages Commission and other relevant authorities. NAMA on her own sought and got clarification from NCAA on the issues raised by NATCA since they were regulatory in nature. The issue is being handled by ATSSSAN and closely monitored by NATCA”.

Agoro lamented the plights and the untidy conditions of the operational environment of ATC units, accommodation for cadets as well as the plight of contract ATCOs in various stations.

To address the issue, he said that NATCA in a strongly worded letter earlier this year raised the issue of deplorable state of furniture, cooling at towers, ATC, CNS facilities among others with NAMA management but that the they had since taken up some of the problems.

Other issues being addressed according to the NATCA President are the review of the monthly remuneration for contract ATCOs, payment of Aerodrome and Approach rating allowance (minimum), payment of transfer claims anytime it arises and needless travels to sign contract renewals.

“Recall that an attempt was made to stop the payment of 13th month (Productivity Allowance) for contract staff last year. It took the intervention of NATCA to get it restored. That action also prompted our insistence on the four key requests mentioned earlier. It is hoped that a joint decision on our next course of action will be ratified at the next AGM”.

“One of the earliest challenges inherited by this administration was the issue of accommodation for our cadets. The transit camp in Lagos was marked for demolition at a very short notice to give way for the construction of the new terminal building. The bulk of the occupants were ATCOs and Cadets for the purpose of training and operational exigencies. It behoves on the Association to step in and arrange a soft landing for our officers. NATCA engaged in a frantic negotiation with the Management, and this gave birth to a rented apartment being occupied now”.

“This has also prompted the need to have permanent structures at least, at the four major stations for our Cadets. I can confirm that our action yielded the required result as we are aware that it was captured in the budget. It is hoped that it would be approved as appropriate,” Agoro said.

The NATCA President, who is seeking re-election promised not to only consolidate on the achievements so far made but to also ensure the association is taken to greater height if he and his team are given another opportunity to serve.

“My dear colleagues, having highlighted what we have done and giving you an insight of what is to come, I charge you to come along with me and indeed the present Exco to chart a course that will take us to the promised land. We have come a long way. We have set out the goals and strategically worked out the means of achieving them. Join the train and let us do it together.” Agoro appealed.

Be the first to comment on "NATCA President, Agoro Promises Better Working Environment, Ensure Provision Of Modern Facilities For Members If Re-Elected"