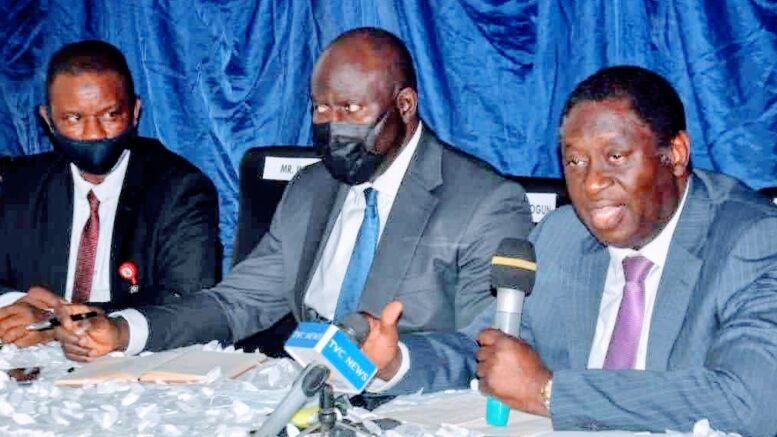 The Chairman, Bi-Courtney Aviation Services Limited(BASL), Dr. Wale Babalakin has said that the Federal Government has been unfair to BASL over it consistent refusal to hand over the General Aviation Terminal(GAT) to it in line with documented agreements despite coming victorious in Arbitration, High, Appeal and Supreme Courts.

This is just as he said that BASL was ready for negotiation with the Federal Government on the ownership of GAT also known as terminal 1, which he said was handed over to BASL.

The Chairman, who made these statements at an interactive session  with aviation correspondents at Murtala Muhammed Airport Two(MMA2), Lagos today, added that BASL was ready to let go GAT provided the government is ready to negotiate and also pay BASL arrears of what the government has made from the terminal for 14 years.

Explaining further, Babalakin alleged that GAT was duly handed over to BASL by FAAN, wondering why the Federal Government is not allowing BASL to take possession of the terminal 14 years after the commissioning of the MMA2.

Recalled that MMA2 started in 2003 and was commissioned in 2007 by the former President Olusegun Obasanjo led administration.

Speaking further, the legal luminary alleged that BASL was also given documented approval to operate regional flights from the MMA2 terminal but that BASL has not been allowed to commence operations from the terminal.

He pointed out that for Nigerian airlines to operate regional flights, they have to taxy their aircraft to the international terminal, a situation Babalakin said involves a lot of logistics and that this cost a lot.

According to him, “Why is government unfair to airlines. The aviation fuel airlines use in taxing to the international terminal to operate regional flight from there is a major cost.”

On Arik Air’s movement to GAT some years back, he alleged  that it was one of the reasons the terminal was not handed over to BASL but that today the airline has relocated some of its operations to MMA 2 and that more airlines are operating from the terminal .

Speaking further, he said, “If not for the molestation of airlines by FAAN, all the airlines will operate from MMA2.”

Commenting on the expansion of MMA2 terminal to accommodate more flights and make apron bigger, Babalakin, alleged that BASL was also granted the approval in writing to expand the terminal to Arik Air’s boundary but that just like the GAT, the government has not allowed BASL to also take possession of it.

Be the first to comment on "GAT Handover Controversy: FG Has Been Unfair To BASL Despite Supreme Court Ruling"