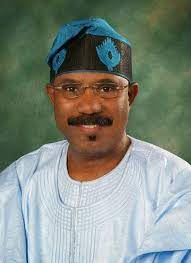 The Secretary to the Federal Government(SGF), Mr. Boss Mustapha has said that the commissioning and handing over of the jetty commissioned for the use of IKO community and handed over to National Inland Waterways Authority(NIWA) is in line with the Federal Government promise that no part of the country will suffer any neglect owing to its geographical location or political consideration.

He said this while commissioning the jetty and terminal building at  Iko community today that was funded by Ecological Project Office(EPO).

The SFG who was represented by the Minister of State, Health, Senator Olorunnibe Mamora said that the present administration approved the project which started in 2018 because of the strategic importance attached to it.

The project he said would help in addressing the menace of pollution and siltation which has been a major problem hampering water transportation in some of the ferry route in Lagos.

According to him, “The completion of this project has further demonstrated Mr. President’s commitment to addressing problems confronting the various communities across the country.”

He stated that it was estimated that an average of about six  million commuters transit from Lagos Mainland to Lagos Island daily, which equally takes travel time of about three hours, whereas ferry transportation through the Inland waterways takes 30 minutes to get to destination.

Mamora said that what this means is that transportation will equally take off about 2 million commuters from the Lagos gridlock.

Speaking further, Mamora said that the National Inland Waterways Authority (NIWA) has identified the CMS –Mile 2 route as the busiest route for ferry services but that for the high pollution rate, flooding along the river banks as well as siltation along the ferry channels it has not been easy for operators.

The Senator said that these challenges have negatively affected ferry services as marine litters and shallow channels have made ferry operators to avoid these ferry routes.

He added that the dream of the present administration is to resuscitate and upgrade existing jetties and make the ferry route operational by removing silt and solid waste along the ferry channels which according to him is in line with international best practices.

The Federal Government intervention on the construction of jetties, Mamora said brought has not only brought about huge relief but it has also assuaged the fear of menace of erosion and other ecological challenges in the area.

In view of the strategic importance of the project, the Minister of State, Health urged the Lagos State Government and NIWA to not only cherish the project but to also protect it from abuse.

According to him, “It is the responsibility of the authority to own and maintain the project to ensure its sustainability.”

On his part, the Chief Executive Officer of NIWA, Dr. John Moghalu said that the project that has just been commissioned would be managed by NIWA   but that it would benefit the IKO communities.

“I reaffirmed the commitment of NIWA to manage the project to ensure it serves the communities very well. I want you to see this project as your project, protect the project from abuse,” Moghalu appealed.

Earlier in her welcome address, the Permanent Secretary Ecological Project Office, Dr. Habiba Lawal, said that the Federal Government received quite a number of requests regarding the need to embark on the project as a result of the imminent danger posed by the devastating recurring erosion and flooding that have been threatening the lives and properties of the communities.

She added that the dangers posed to the communities necessitated the prompt attention the project received from the Federal Government.

Dr. Lawal , who was represented by a Director in EPO, Yusuf Addy said that it is the conviction of EPO that the intervention by the Federal Government  will provide succor to the communities whose lives  and properties were in danger .

EPO, he said has entrenched a new of organizing in collaboration with the host community a befitting ceremony for the commissioning and handing over of its project. tradition, adding that this singular project act will serve a dual purpose of taking ownership of the project and ensuring its sustainability.

In his words, “I have no doubt that NIWA and indeed the commuter will ensure that the jetties and terminal building is guarded jealously.”

Be the first to comment on "Commissioning Of Jetty, Terminal Building In Line With FG’s Promise—SGF, Mustapha"