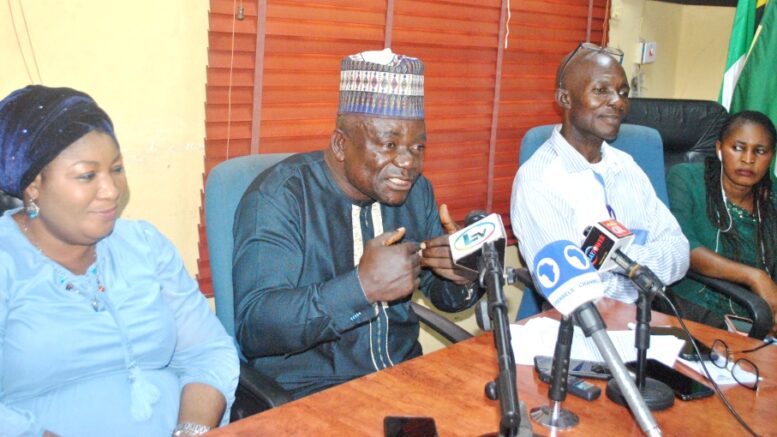 …Say Protecting NCAA’s Integrity A Task That Must Be Done

The National Union of Air Transport Employees(NUATE), has called on the Presidency to intervene in the ongoing calls in some quarters that NG Eagle should not be given Air Operators Certificate(AOC) following the inability of Arik Air, managed by Asset Management Corporation of Nigeria (AMCON) to pay debts owed aviation agencies totaling N19 billion.

NIATE said that to avert a major mishap in the aviation sector, the Secretary to the Government of the Federation (SGF) and the Chief of Staff to the President (CoS) to as a matter of urgency intervene in these matters and facilitate an immediate cease fire and chart a path to progress on the sensitive issues.

Briefing aviation correspondents at the NUATE Secretariat, Murtala Muhammed Airport, today the General Secretary of the union, Comrade Abba Ocheme explained, that it was is important to avert a chaotic end to Arik Air, adding that it is already within the public domain that AMCON is presently executing a receivership management over Arik Air as ordained by a competent court since 2016.

He stated that this came about by the airline’s insolvency as a result of a heavy debt pile and that at the last count, Arik Air’s debt burden is in the region of N300,000 billion .

The NUATE scribe said that while its debt stood at N300,000 billion, the airline assets are worth only about half of its total debts adding that what this means is that Arik Air is unable to pay its debts.

This solid fact, Ocheme said cannot be altered by the denial of AOC to NG Eagle. “The point here is that Arik Air, or AMCON cannot raise N19B being demanded by FAAN and the NCAA. And it is honestly unhelpful to create enmity with FAAN or NCAA for Arik Air or AMCON since the Airline will always need the support of the two agencies to survive.

“Therefore, those proposing that AMCON’s NG Eagle’s AOC should be on hold until Arik Air’s debts are settled are only pushing AMCON to the wall and that is towards liquidation. Considering the airline’s low worth compared to its huge debts, liquidation will bring about a chaotic end to Arik Air by which all parties will be losers. This should be avoided by all means,” Ocheme said.

Speaking further, Ocheme argued that NUATE primary focus as far this crisis is concerned is for the sake of Arik Air workers who its members.

According to him should there be a chaotic end to Arik Air by way of liquidation, the workers would count among the greatest losers.

“You are all witnesses to the untold hardship that befell ex-workers of the defunct Nigeria Airways after the airline was unceremoniously liquidated by the Obasanjo regime in 2004. It took an intervening period of twenty years and spanned four governments; the governments of Obasanjo, Yar’Adua, Jonathan and Buhari before the hapless workers began to get some reprieve in terms of their terminal benefits. No one should be so wicked as to wish similar experience for Arik workers,” he said.

He posited that in view of this the Presidency is urgently needed to grant AMCON the space to continue to protect the employment of over 2,000 employees in Arik Air’s employment, adding this will also afford the unions and the management to negotiate severance benefits for Arik workers; a process that is presently at concluding stages.

Similarly, Ocheme pointed out that denying NG Eagle AOC will shut out 20,000 potential jobs for Nigerians, together with the opportunity for reasonable number of Arik staff to migrate to the new airline. This would be very unfortunate indeed.

Comrade said that, the Presidency need to intervene in the matter to keep NCAA’s integrity intact

The NUATE Secretary General stated that one of the biggest casualties of this imbroglio is the apparent desecration of NCAA, the regulator of the industry.

He contended that political actors have used opportunity to interfere and dictate to the authority on whom to and whom not to issue certificates, adding that this has thoroughly denigrated the NCAA and whittled its autonomy or independence granted by the Nigerian Civil Aviation Act.

In his words, “If this farce succeeds and NG Eagle is denied AOC despite meeting all requirements, but forces outside NCAA says otherwise, it would be a dangerous precedent capable of tumbling the entire industry and wiping out all the gains in safety and international recognition achieved over the past years.”