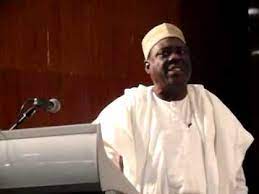 The Director General of the National Council for Arts and Culture(NCAC), Otunba Olusegun Runsewe has described the passing on of Prof. Sule Bello, a foremost Professor of History as not only painful but also very sad.

Otunba Runsewe stated this in his condolence message to the family of Prof. Sule Bello, who passed on last Sunday.

Extolling the virtues of Bello, the NCAC boos said that he was a great Historian, world class intellectual and a patriotic Nigerian, adding that the gap his death has created will be very difficult to fill.

Runsewe described the late Prof. Sule Bello as an outstanding intellectual, who contributed in grooming a crop of young and intelligent Nigerians while he was serving as a lecturer at the Ahmadu Bello University Zaria.

According to Runsewe, Prof. Sule Bello was a frontline Historian whose contribution to scholarship can be found in the various books and journal articles he wrote and the large number of intellectuals he mentored.

Otunba Runsewe stated that as the Second Chief Executive Officer of NCAC, he brought his wealth of knowledge and experience to bear in repositioning the Council for greater efficiency in service delivery.

“Bello laid the foundation of what we are reaping in the Council today” Runsewe said.

He added that that his style of administration firmly established the NCAC on a sound footing, adding that the entire members of staff of the Council will remember Prof. Sule Bello for his hard work, administrative acumen, vision, dynamism, high sense of innovation, fatherly mentorship and capacity to achieve high results.

Otunba Runsewe pointed out that the entire members of staff of the Council have surrendered to the will of Almighty God while praying for the repose of his soul and for Almighty Allah to grant his family, friends, well-wishers and the entire people of Kano State, the fortitude to bear the irreparable loss.