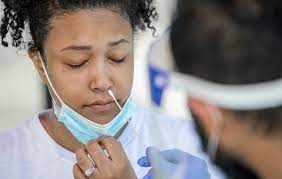 No fewer than 2,000 Nigerians and foreigners have been banned from traveling abroad and into the country for a year for evading the Coronavirus Polymerase Chain Reaction (PCR) test at the country’s international airports.

The Presidential Steering Committee (PSC), on COVID-19 announced the ban in Abuja and the National Incident Manager (NIM), of the Committee, Mr Mukhtar Muhammad made it known at its briefing, in Abuja.

Muhammad said that the names of over 2,000 citizens’ and foreigners had been pasted at all the major federal medical facilities where medical experts were assigned to give care to Nigerians and foreigners that had travelled into the country during the COVID-19 third wave.

He explained that the government had insisted that passengers, who arrived into the country, especially from high risk countries, must be quarantined in a government provided facility, and that the passports of those who failed to comply with the protocol had been suspended for one year.

“We have included the provision of quarantine for passengers, who arrived from high risk countries and people who evaded these protocols have been penalised by publishing their names, as well as suspending their passports for one year.

The PSC on May 1, 2021, issued a Travel Advisory for Passengers arriving in Nigeria from Brazil, India and Turkey.

The precautionary measures were a necessary step to mitigate the risk of importation of variants of concern and breaking the chain of transmission to the population, according to the chairman, Boss Mustapha.

Under the measures, passengers arriving from/or that have visited any of these three countries within fourteen (14) days prior to the visit to Nigeria, were required to follow mandatory arrival quarantine and testing protocols in designated facilities.

But many passengers failed to observe the compulsory isolation or to present themselves for the PCR repeat test on day seven, various findings have shown.

The PSC had previously also published names and passport numbers of defaulters.