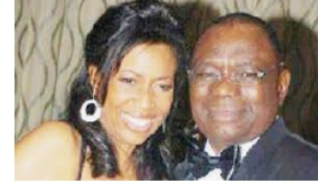 Mrs. Oluwayemisi Ajayi, the widow of late Dr. Tosin Ajayi, has revealed that the relationship that existed between her deceased husband and a former Miss Nigeria, Helen Prest, was nothing but adultrous one.

Oluwayemisi in a 27-paragraph counter affidavit filed against the suit instituted by Helen Prest, detailed how the ex- beauty queen allegedly engaged her late husband in extra-marital affairs for many years.

Helen alongside his daughter, Oluwatomisin in a pending suit before the Federal High Court, Lagos filed on July 23, 2021, and has First Foundation Medical Engineering Company Limited (FFMECL); Registrar-General of the Corporate Affairs Commission (CAC); Mrs Oluwayemisi Ajayi; and Mr Patrick Abak, a lawyer as first to fourth respondents.

The legal battle is centered on who should be in control of First Foundation Medical Engineering Company Limited and some other properties owned by the late Dr Ajayi.

In a 71 paragraph affidavit filed in support of the suit against the respondents and deposed to by Helen Prest’s daughter (first plaintiff), she averred that her late father married to Oluwayemisi and that they had children. But they were separated for about 35 years before her father’s demise.

Oluwatomisin claimed that in the course of the separation between her late father and Oluwayemisi, the late Ajayi and her mother, Helen Prest married and have birth to her.

However, Oluwayemisi in a counter affidavit deposed to by herself and filed on September 13, 2021, averred that she is aware that the first plaintiff (Oluwatomisin) presents herself as the “love child of an adulterous relationship ” between her deceased husband, Dr Ajayi, and his adulteress, Helen Prest.

The deponent stated that although she was not in a position to confirm if Tomisin Ajayi is a child of her late husband, because the late Ajayi did not introduce her to the family in his lifetime, but she is ready to accept the first plaintiff in good faith as one of the beneficiaries of the estate of her deceased husband.

On her marital status to the late Ajayi, the widow averred that she was legally married to the deceased and there was nothing like issue of divorce contrary to the claim of Helen Prest in their affidavit in support of the suit. She stated that at no point in time whatsoever did late Ajayi and her terminate their marriage and challenged Helen Prest to present any document in opposition to her marriage certificate.

The widow stated further :”Although Helen Prest was a concubine of my deceased husband, she was never a shareholder, director, officer, employee or business partner of, or otherwise associated with the affairs of, FFMECL or any other companies in which my husband was a major shareholder (including those wherein I am also a shareholder), as my deceased husband never wanted his mistress, the second plaintiff, to be a part of FFMECL or any such companies in any capacity whatsoever”.

Be the first to comment on "Helen Prest Was My Husband’s Sidechick Not Wife, Dr Ajayi’s Widow Tells Court"