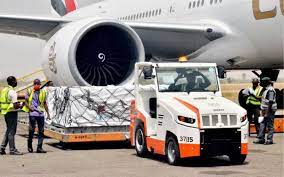 The Managing Director /Chief Executive Officer of   ABX WORLD, Capt John Okakpu has  stated that Nigeria has the capacity to generate $250 billion  annually on agro export commodities  if the country adhere to export market requirements .

He stated this while presenting a paper titled, “Matching Export To Markets” at the recently concluded Aviation and Cargo Conference  also known as Aviacargo in Lagos.

He posited that the  the only way to resolve this anomaly is to strictly comply with the primary export markets
requirements .

Okakpu listed the requirements to include :  GAP certificate for the agro produces to be exported, Phyto Sanitary/ Veterinary Certificates and  Custom Certification.

He argued that the major obstacle preventing Nigerian exporters from having a seamless export experience are GAP certifications and the choking up of Nigeria’s exit points with multiple/multiplication of agencies and too many MDAs  both relevant and irrelevant ones positioning themselves to drive agro export.

Agro export programme, the CEO of ABX  World said is 100 per cent private sector driven and  that it will forever remain so, adding that for almost 5 decades, Nigeria has had about five different policies on agro programme but that each of them dies immediately that regime  that formulates the policy is over.

“One of the primary failures of the export process in Nigeria, is our inability to match our exports to markets, especially in the areas of documentation and certifications requirements. Exporters in Nigeria continue to rely on our own bogus documentation and certifications standards which are mostly not recognised anywhere in the world,” he said. The ABX World boss said that the first step in engaging in export is to identify, properly analyse and conform with the requirements of the proposed importing countries.

The exporter, he posited  has to provide the commodities needed, their satisfactions and documentations, adding that after these a seamless export can be carried out.

Okakpu  posited that it has been severally identified by economic experts that agro export is the surest and fastest way to shore up increase in forex inflows and as such Nigeria  government has spent a huge chunk of resources to initiate this process, but today, the country is  almost at the brink of economic collapse, as a result of serial failures by the government agencies that have been mandated and economically empowered to drive the process.

According to him, “Due to the continuous dwindling revenue accrued from crude oil sales and the failure to increase our export activities, especially agro export activities our Naira is continuously degenerating into worthlessness.”

Government fees and taxes,which is about 90 per cent higher compared to that of Nigeria’s nearest competitor, he identified as another critical part and one of the most important aspect part of our agro export woes the country is facing.

He contended that  in most cases it is cheaper for most freighter aircraft to depart from Nigeria empty than carry cargo.

Speaking further, he said, “We all know that the foreign exchange rates are going up everyday and all aircrafts spare parts are imported and most of their maintenance (A, B, C, D (heavy), hot section, 4800 hrs, etc. checks) are done abroad. This eats into their revenue, besides due to the COVID-19 pandemic income generation by airlines have drastically reduced living them barely surviving to stay afloat. We import almost everything for aircrafts operations including fuel. Then we are now looking at heavy govt fees/taxes and later will turn around expect our agro products to be competitive in the world market, not possible.”

He also pointed out that one of the challenges of agro export business is that almost all the farmers in Nigeria are neither GAP certified nor do they understand what GAP is.

He advised the Federal Government to invest in sponsoring the GAP certifications of major known farmers, who will eventually form the nucleus of GAP certified farmers that will be able to establish Nigeria’s own GAP standards as in the case of many advanced countries such as Ghana, Kenya and others instead of wasting its resources on ventures that would not yield any results in agro export activities.

Be the first to comment on "With Strict Adherence To Export Market Requirements Nigeria Can Generate $250B Yearly–Capt. Okakpu"