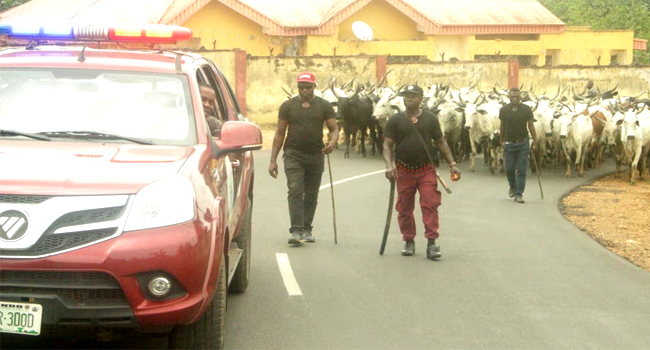 The Commander of the Corps in the state,Chief Adetunji Adeleye,  said the cows and the herders were arrested at the Oke Ala Area of Akure, the state capital.

“We have arrested about 180 cows, they are in our custody as we speak. We intend to release them to the owners after complying with the regulations as contained in the anti-open grazing law.

“We have also detained the three herders arrested with the cows. Their boss has come, so we are dealing with the boss now,” the Amotekun boss said.

He lamented that some of the herders still continue  in their old ways to disobey the Anti-Open Grazing Law despite the state government signing it.

According to him, “We have several herders here with us and we are making them comply with the enacted law which stipulates a penalty for defaulting herders.”

Be the first to comment on "Amotekun Arrests 3 Herdsmen,180 Cows For Breaching Anti-Open Grazing Law"