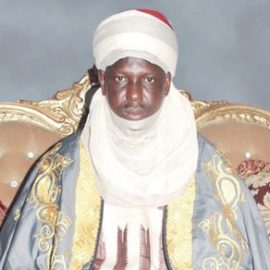 His Royal Highness, Mai Borgu, Barrister Mohammed Dantoro, Kitoro the IV, has called on the military authorities to deploy soldiers to protect Borgu Kingdom in Niger State from being over run by insurgents.

The Royal Father, while reacting to the sad news of the kidnapping of the District Head of Dekara, Dodo of Wawa Dr. Mahmoud Ahmed in Borgu kingdom, disclosed that the vast Borgu forest which forms the nucleus of the famous Kainji Lake National Park, has been over run by the terrorists, and had formed the headquarters of their operations.

Disturbed by the ease at which the insurgents had easily taken over the Borgu forest which shares boundaries with Benin Republic, Kwara and Kebbi States, the Mai Borgu predicts that it won’t be long before the entire Kingdom of Borgu land will fall to the superior power of terrorists, except the military deploy its Air Force and infantry units to push them out of the forest and check their incursion from the borders of Benin Republic into Nigeria.

“This is an urgent appeal and call for immediate deployment of the military both on the air and ground to root out these insurgents or else we shall have on our hands another terrible civilization displacement, bigger and worst than the Sambiza experience in Borno State and indeed, the Borgu forest is larger in size and cover large expanse of Pristine ecosystem” his royal highness further explained.

The Mai Borgu however denied media reports, saying he was kidnapped by the insurgents, noting that he was safe and healthy.

” I have been receiving calls from Nigerians far and wide who wanted to confirm if am safe, yes, I am safe . I was not the victim but the District Head of Dekara community in my kingdom. Four months ago or there about, thee dare devil insurgents also kidnapped the District Head of Dekara, a community under my kingdom and we are yet to see him. I am saddened by the development and therefore, requests that the military respond and Comb the Forest of the Kainji Lake National Park and rescue the district head and others kidnapped victims held up in the heart of the large expanse of the pristine ecosystem before they are moved across the borders into Benin Republic.