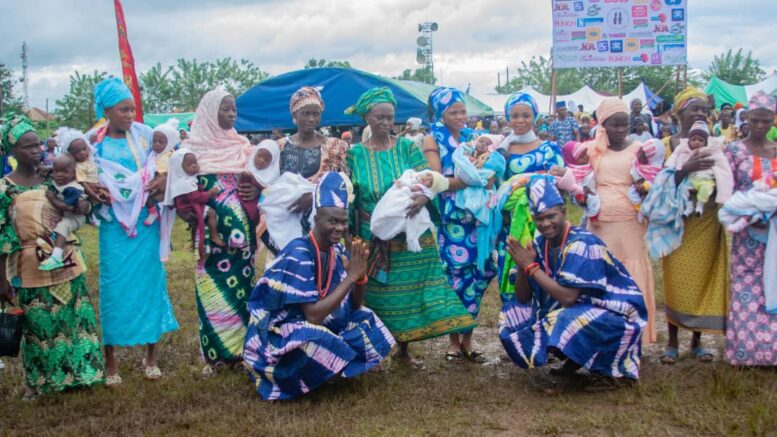 The Olu of Igbo-Ora, His Royal Majesty, Oba Jimoh Olajide Titiloye (Asoroolu Ayinla V) has announced dates for activities lined up to mark the 2021 edition of the famous Igbo-Ora World Twins Festival.

Igbo-Ora World Twins Festival is an annual cultural tourism event celebrated to promote the multifunctional twinning cultural heritage of the Land of Twins.

The festival with the theme, “Twinning for Global Medical Breakthrough” is expected to celebrate the medical team of National Medical Centre, Abuja that successfully separated the conjoined Martins twins in 2020 among other lined up of activities.

A statement jointly released by the Most Famous Twins in African Tourism and Global Facilitators of the Festival, Ambassadors Taiwo and Kehinde Oguntoye, said that the Olu of Igbo-Ora has disclosed that the one week long festival will commence on Sunday the 3rd of October with a special church twins thanksgiving service at the Methodist Church, Igboora to be followed on Monday October 4 by the traditional cleansing of the town called Iwure . According to the release, the much anticipated twins traditional/cultural games day will hold on Thursday, October 7.

This, the statement said will also feature exhibition of local games for the twins by the community while Friday, October 8 will witness Special Jumat Twins Service at the Igbo-Ora Central Mosque to be followed by Royal Homage to the paramount ruler of Igbo-Ora land.

“The grand finale which is also the Twins Pilgrimage Day comes up on Saturday, October 9 at the festival arena, Methodist Grammar School, Igbo-Ora, Oyo State, Nigeria.

“Other activities of the festival which stands as a unique cultural tourism competitive advantage for Nigeria include: Twins Concert, Circus performances, Twins Appellation, Twins Fashion and Parade, talent show among other activities,” the statement also said.

The Executive Governor of Oyo State, Engr. Seyi Makinde will be the Chief Host while the Life Grand Patron of the festival, His Imperial Majesty, Oba Dr. Lamidi Adeyemi Atanda, The Alaafin of Oyo is expected to lead other dignitaries spread across the globe to welcome all and sundry as well as family, friends and well wishers of Multiple births to this year unique gathering

According to the LOC Chairman, HRM Oba Adedamola Badmus, Olu-Aso of Iberekodo, Igbo-Ora, who stated that during 2021 edition of the Igboora World Twins Festival, local and international participants and tourists will follow and observe all COVID-19 protocols during all scheduled activities of event.