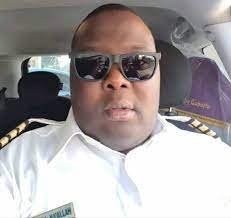 … He Was Strangled To Death–Senator  Ibn Na’Allah

This is just as Sen. Na’Allah, the father of the deceased has revealed that the killers of his son, were not armed with guns.

A statement by Modibbo and made available to journalists described the death of the 36 years old pilot as unfortunate and called on the security agencies to unravel the killers of the pilot.

Recalled that Capt. Na’Allah was strangled and found dead inside his bedroom in his Government Reserved Area (GRA) residence, Malali in Kaduna North Local Government Area on Sunday.

At the moment, the cause of his untimely death remained unknown, but sympathisers have challenged the security agencies to get the killers to serve as a deterrent to others.

Modibbo prayed that the family would have the fortitude to bear the loss.

“I am greatly saddened at the news of the murder of pilot Abdulkarim Na’Allah in Malali GRA Kaduna. While I am my deep condolences to distinguished Senator Bala Ibn Na’Allah, I pray that Allah grants the entire Na’Allah families the fortitude to bear the great loss.

“I also hope that the responsible authorities will step up with investigations to arrest and bring to book the perpetrators of this crime. The young Na’Allah had huge qualities. May Allah forgive his shortcomings and grant him Aljannah.”

Meanwhile, Sen. Bala Na’Allah, has declared that the killers of his son, were not armed with guns.

A statement signed by Sen. Na’Allah, who is also the Senate Committee Chairman on Air Force, noted that from the brief received so far, his 36-year-old son’s killers were not armed with guns.

According to him, himself a trained pilot, the killers gained access into the son’s house through the roof and strangled him.

Na’Allah also expressed the hope that his son’s death would play a major role in “finding solutions to the problem facing our great nation.”

All the three sons of the lawmaker are trained pilots.

The statement released by the lawmaker’s Special Assistant, Garba Mohammed, in Kaduna on Monday, reads, “Let me, on behalf of Na’Allah family, specifically confirm the death of Abdulkareem Na’Allah, who was attacked and killed by yet-to-be identified persons.

“From the reports received so far, his attackers were not armed with guns. They simply gained access to his house through the roof and strangled him to death. As a family, we will continue to love him, even in death, because he was such a wonderful person in his life.

“His life is not better than any other Nigerian. As a family, we leave everything in the hands of almighty Allah to whom we have since surrendered in pursuit of the strength to bear the loss of Abdulkareem in our family and by the numerous calls, messages and visits we have received so far, we have every cause to thank almighty Allah for his love and mercy to the family.

“We assure the public that though we feel greatly diminished in the manner he was killed, we shall remain steadfast in our unshakable belief in the will of Allah.

“We shall persevere and overcome this tragic loss of one of the finest ambassadors of our family who has done us proud in his life.

“We express the hope that his death will play a major role in finding solutions to the problem facing our great nation. May Allah grant him Aljannah firdaus. We thank the Nigerian Police and the government of Kaduna State for their intervention so far.”

Be the first to comment on "NCAT Boss Condoles With Sen. Na’Allah Over Murder Of Son"