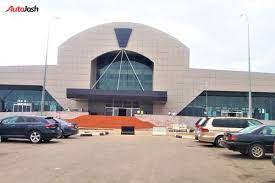 … To Manage Airport For 30 Years

The Delta State Government today formally handed over the Asaba International Airport to the Asaba Airport Company Limited, the company that won the concession bid.

He said  that the state government was happy about the concession model, which the Federal and other states governments have been studying .

After receiving the handover documents, the Chairman of Asaba Airport company Ltd, Mr. Adebisi Adebutu said the transition had been fantastic and seamless, adding, it is  a fantastic relation.

The SSG was accompanied by a number of advisers including Senior Policy Adviser, Professor Sylvester Monye, the man who drove to concession to fruition.

The Concession agreement, which was signed in February 2021 will run for 30 years.

Prior to yesterday epoch ceremony the concessionaire has positioned making the airport to wear a new look.  Car parks  lights which were nonexistent had been installed and 120 staff employed and trained to put the airport in full operation.

Passengers enjoy a free wifi within the arrival and departure halls.

For the first time, the concessionaire has been able to attract a Ground Power Unit ( GPU) to the airport through SAHCOL, the handling company.

The concessionaire had paid N1 billion to the state government when the agreement was signed, and will pay an annual fee of N100 million while the agreement subsist.

The Asaba Airport Company Limited, the concessionaire,  is a consortium that has technical partners which include Air peace as the anchor airline and MRO operator, Multifreight  Cargo and logistics for cargo and logistics centre, Rainoil Ltd  and Cybernetic Ltg to develop tank farm and supply Aviation fuel, Arbico construction company to build business park, hotel and convention centre and Quorum Aviation Ltd toch develop private  jet and helicopter terminal of the Airport.

According to the MD, three airlines – Air Peace, United Nigeria Airline and Aero are currently operating into the airport, adding Air Peace will increase his daily flights into the airport.

He said Ibom Air, Dana Air and Arik have indicated interest to operate into the airport.

Be the first to comment on "Delta State Government Hands Over Asaba Int’l Airport To Concessionaire, Asaba Airport Company Limited"