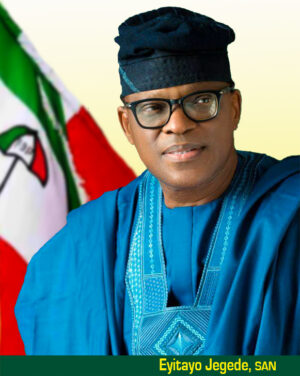 Governor Akeredolu, SAN, had while reacting to the recent Supreme Court Judgement which dismissed Jegede and the PDP’s appeal in a split decision of 4 to 3 in the October 2020 Governorship poll had enjoined Jegede to join him in moving the state forward

However, PDP in a press statement tittles ” Akeredolu’ s olive branch : Channel your energy to the welfare of Ondo citizens” , said Akeredolu call on the PDP candidate, Eyitayo Jegede ,SAN, to join him to move the state forward is laughable.

The opposition party said the PDP and its candidate cannot be part of a government that has thrown out many students of tertiary institutions in the state because their parents can not afford to pay the astronomical school fees charged by the Akeredolu government.

The PDP said it is unthinkable that Akeredolu can ask it candidate to join a government that has pauperised civil servants in the state through the payments of 30% salaries that are not even regular. Civil servants now have to take loans to be able to pay house rents or send their children to school.

The press statement added that the Academic Staff Union of Universities (ASUU) Olusegun Agagu University of Science and Technology Okitipupa has just embarked on an indefinite strike, adding that there has not been any government’s response to all these myriad of problems?

The PDP added that it is important to stress that before the October 2020 election, Eyitayo Jegede, SAN and the PDP drew up a well articulated manifesto on Education, Health Care delivery, Agriculture, Industrialization, Welfare of Civil Servants and much more in contradictinction to what is obtainable now in the state, Hence, to this extent, there is no meeting point between what was designed by the our and Akeredeolu’s score card.

The opposition party further stated that the Supreme Court verdict has further exposed the impunity which is the trademark and the foundation of the All Progressives Congress (APC) and its Government at all levels. All the seven Justices of the Supreme Court agreed that, Mai Mala Buni acted in clear violation of Section 183 of the 1999 Constitution of Federal Republic of Nigeria (as Amended).

This has become the talking point of the political space since the judgement was delivered. Our jurisprudence on election matters has been enriched and everyone is grateful to Eyitayo Jegede and the PDP for not allowing the APC to drown our democracy in the sea of their impunity.”Our party wishes to advise Akeredolu to channel his energies to improving the welfare of Ondo citizens instead of grandstanding and clicking of wine glasses over the Supreme Court Judgement” the statement reads. End.