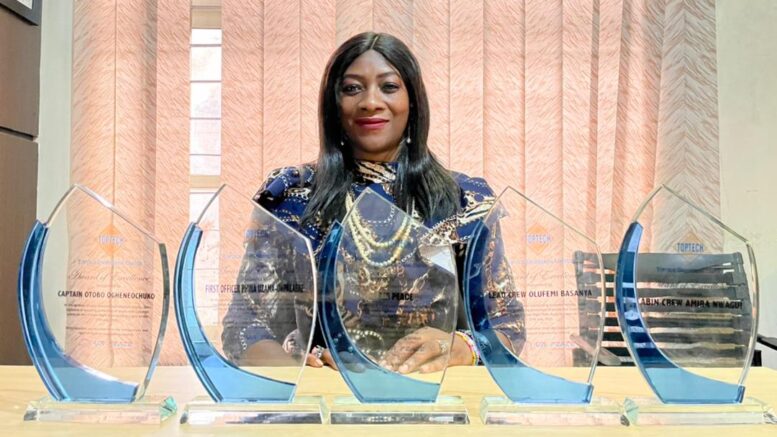 Dauntless Air Peace crew have been honoured with five Awards of Excellence for thwarting an attempt by one, Mr Eze Kelvin to steal a considerable amount of money belonging to the Managing Director of Toptech Engineering Limited, Engr. Adedeji Adeniyi,

Spokesperson of the airline, Stanley Olisa, who disclosed this , explained that the incident occurred on a 7:40am Accra-Lagos flight on July 17, 2021.
He revealed that the crew, who operated the flight have been conferred with awards by the management of Toptech Engineering Limited in recognition of their outstanding customer service and extra-vigilance in ensuring protection of items on-board as well as customer safety.

According to Olisa, “Our crew noticed Kelvin taking an envelope of money from Adeniyi’s laptop bag in the overhead cabin. Aware of the former’s theft antecedents, our crew subtly questioned him about the ownership of the bag, which he claimed was his. But when Adeniyi returned from the lavatory, it was confirmed that the bag belongs to him. Adeniyi later disclosed that the envelope had a significant sum, which was still intact when Kelvin returned the envelope.”

Olisa stated that the incident was immediately reported to the airport security officials who are handling it, and that Kelvin has been blacklisted from flying with Air Peace.

Recalled that in June this year, Air Peace crew demonstrated commendable security alertness and vigilance as they prevented the trafficking of two babies by a couple.

Be the first to comment on "Foiling Of Inflight Theft : Dauntless Air Peace Crew Receive Awards"