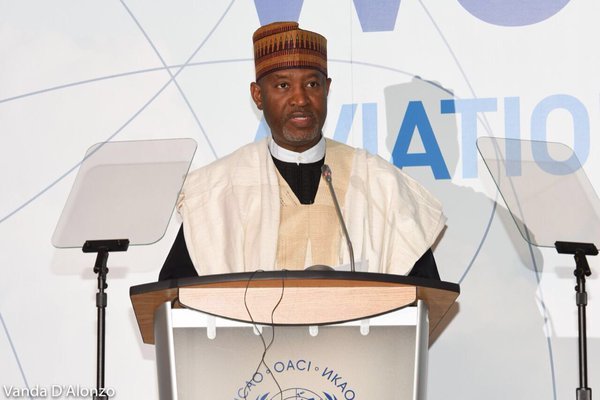 The Federal Government through the Aviation  Minister, Senator Hadi Sirika, has ordered  airline operators in Nigeria to refund the full cost of travel tickets to passengers after a two-hour delay.

The Minister’s reaction is coming on the heels of complaints of several cancellation of flights by airlines.

This is just as he put the  debts owed Federal Government agencies
by airlines in the country  at  about N37 billion, vowing to recover every all the debts.

Sirika made these statements at a  weekly press briefing organised at  the Presidential Villa, Abuja, yesterday..

“On domestic flights, delay beyond one hour, carrier should provide refreshment and one telephone call, or one SMS, or one e-mail. They should send you an SMS or email or call you to say, ‘I am sorry, I am delaying for one hour.

“Delay for two hours and beyond, the carrier shall reimburse passengers the full volume of their tickets.

Sirika stated that already the Aviation Ministry had started sanctioning some airlines, who according to him  brached the rights of consumer, but urged passengers not to be unruly at airports.

The Minister alleged that  debts owed Federal Government agencies by airlines in Nigeria has risen to about N37 billion.

Just as he equally claimed  that BASL  owed the Federal Government  N13 billion  and that  despite that , BASL has  not remitted a penny into government purse for 13 years.

“If you’re owing government, you are owing FAAN, the Bi-Courtney is owing about N14 billion as at the last count. It has not paid a single dime since the time he started to run the terminal building. And we have not ceased giving him, electricity, water, fire cover, and so on and so forth. He hasn’t paid a dime for 13 years.

“If we go to shut his doors, media, of course, and Nigerian people will say we’re killing businesses but he is killing our services too, because we have to have that money to provide for that toilet that you’re looking in Lagos airport.”

He listed some of the agencies owed huge amount to include  Federal Airports Authority of Nigeria(FAAN),Nigerian Airspace Management Agency(NAMA) and Nigerian Civil Aviation Authority(NCAA), among others.

The Federal Government, Sirika stated would go after the airlines and other aviation stakeholders to ensure they pay back the debts they owe .

On the controversial disbursement of  N5 billion COVID-19 palliative to aviation stakeholders, Sirika posited that it was agreed that airlines owing  federal agency should not benefit from  the largess.

“In fact, the service providers in our system, FAAN, NAMA, said oh these guys are owing us, we   should take the money from the money being given as palliatives.

“We said no but the intent of President Buhari is to ensure that he cushion the effect on businesses. Let us find a way of surviving, and let them take the money. We would have taken the money and left them with nothing and we stay with nothing,”  he said.