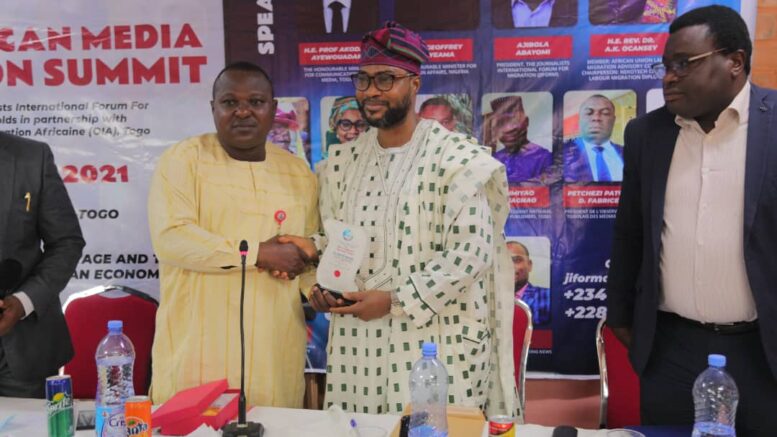 Participants at the just concluded two-day West African Media Migration Summit in Lome, the Togolese capital, have called on the Economic Community of West African States (ECOWAS) to find a lasting solution to the continued enslavement of her citizens in the Middle East.

The conference was organized by the Journalists International Forum For Migration (JIFORM) headquartered in Nigeria with over 300 journalists across the globe covering migration matters in partnership with the Organization Pour integration Africaine (OAI), Lome, Togo led by Dr Williams Azuma Ijoma to enhance media capacity and stakeholders on migration trends and dynamics.

A statement signed by the President of JIFORM,  Ajibola Abayomi,explained that the  event had in attendance over 70 participants apart from those that participated virtually and all were presented with certificates of participation while dignitaries like Minister of Foreign Affairs, Nigeria, Onyeama Geoffrey; the former Nigerian Ambassador to Singapore. Bolaji Alade Akinremi; Dr Williams Azuma Ijoma from Togo, Hon Christian Bankole and Dr Shehu-Hammad Yekeen from Benin Republic and Ambassador Blessing C. Gozi-Anyaokei were honored with awards for their roles on migration matters and societal developments.

Presenting the communique of the summit at the event, the President JIFORM, Ajibola Abayomi, urged the ECOWAS leadership led by President Nana Akufo-Addo of Ghana to pay more attention to migration trends as Africa worked towards agenda 2063.

Ajibola pointed out that the purpose of the summit was “not to cast aspersion on any government or countries rather to learn some basic principles of migration and jointly proffer solutions to the various challenges militating against our growth as a people despite the enormous human resources abound in the sub-region.

“Migrants from West Africa are seeking employment and better economic opportunities. The reality is that “economic hardship”, “poverty” and “better business prospects” were the dominant reasons why Africans emigrate elsewhere, sadly the Middle East countries have continued to take advantage of these shortcomings to maltreat and subject mostly the women to untoward hardship under the Kafala system of employment over the years.”

“The ECOWAS must adjust to the reality by improving the economic wellbeing of her people to limit the urge for desperate and irregular migration leading to death in the desert and on the Mediterranean Sea on one hand and slavery especially in the Middle East” he said.

Delivering the keynote address titled, “Media and Diaspora Matters” Ambassador Bolaji Alade Akinremi, the former Nigerian Ambassador to Singapore noted that Nigeria reportedly accounted for about 51 per cent of the total African migrant population, with an average number of more than 20 million people has put in place machinery to strengthen for implementation of migration-related programmes and projects.

The implementation, he said would entail technical assistance, capacity building of technical experts from various Ministries/Agencies such as Ministries of Justice, Interior, Labour, Trade, Nigeria Immigration Service, NAPTIP, NDLEA and National Commission for Refugees and Internally Displaced Persons” he added.

A member of the  African Union Labour Migration Advisory Committee and Principal Consultant to the Sierra Leonean Government on Migration Matters, Dr Princess Asie Kabuki Ocansey from Ghana, urged African leaders to initiate a multilateral platform to negotiate decent work with the Middle East leaders for the migrants starting with the ECOWAS.

She suggested to the ECOWAS and other regions on the continent to completely ban illegal labour recruitment, un-certified recruitment agents and agencies and called for adoption of 10 keys of migration.

Christian Bankole, from Benin Republic said all hands must be on the deck to address job opportunities for youths to curb irregular migration.

In his submission, former President of the Nigerian Union of Journalists and Federation of West African Journalists, now Commissioner for Information, Ogun State, Nigeria, Abdulwaheed Odusile,  admonished the media professionals to lead by example with their conducts and compliance to the immigration rules in every country, shun sensationalism, report migration with human face and lead advocacy against irregular migration.

The Global Director, Diaspora Innovation Institute & Professor of Public Policy and Administration—Medgar Evers College of the City University of New York, USA, Prof. Byron  Price called for more opportunities for the youths and noted that although the Mediterranean Sea crossings dropped 20 per cent in 2020 to 81,502 arrivals with African migrants comprising roughly half of those numbers.
He however said that the border closures in 43 of Africa’s 54 countries in 2020 have created more challenges for migrants traveling regionally for work.

CO-Founder GepCare Foundation,Debbie Gahan, urged the media practitioners in their reportage to encourage the government to continue to strengthen the capacity to curb this irregular migration and human trafficking “through legislation, better coordination among law enforcement agents, inter-country cooperation, improved victim support and protection services and rehabilitation of victims.