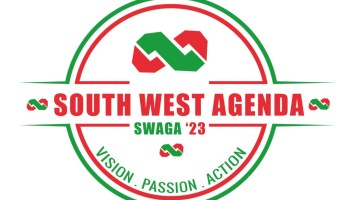 Ado Ekiti, the  Ekiti State capital has donned a festive look as eminent members of the ruling All Progressives Congress (APC), arrive from all parts of the country for the inauguration of the state’s chapter of the South West Agenda for 2023, SWAGA, scheduled for tomorrow, Tuesday.

SWAGA is a political pressure group within the APC, tipping the Leader, Asiwaju Bola Ahmed Tinubu, as presidential choice for the party in the apex election billed to hold in 2023.

Top shots of the APC from within and outside the country have been trooping into Ekiti State to show solidarity in the ongoing move to rally support, as well as persuade Tinubu to throw his cap into the ring to clinch the presidential ticket at the appointed time.

SWAGA was first launched in Ibadan, the Oyo State capital in January and had spread its tentacles to Osun, Ogun, Ondo and now birthing in Ekiti State in a festering drive by faithful of the ruling party to ensure credible leadership for the country at the sundown of current administration.

Ahead of the Tuesday lunch, SWAGA members across the 16 Local Government Area in the state have been holding series of meetings to lend befitting colours to the occasion as they gather in Ado Ekiti, to witness the event, which promises to be a gathering of who is who across political lines, showing solidarity with Tinubu, a man many believe has the needed touch to turn the country around for good.

National President of SWAGA, Senator Dayo Adeyeye, had hinted that the group has been soaring in strength and popularity since formation “because the overwhelming majority of APC faithful believe in the political sagacity, developmental zeal and business acumen of Tinubu,” which, according to him, “was earned over the years through dint of hard work and hearty commitment to the course of the masses. “

He noted that the APC really need to put its house in order, preparatory to 2023 so as not to rescue defeat from the mouth of a tough won victory

He explained that the group had done a thorough homework and research before settling for  Asiwaju Tinubu as one who has what it takes to provide the needed direction for the country from 2023, when the incumbent administration would end its tenure.