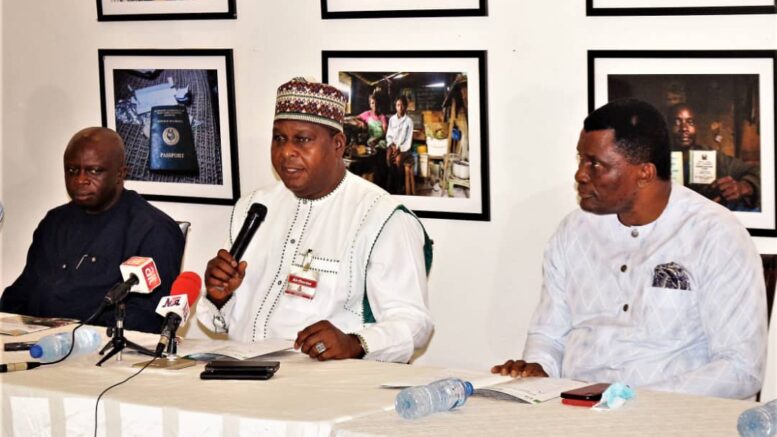 …To Institute Art Competition To Celebrates Intersection Of Sports, Culture

He described the duo’s action as a common display of patriotism and cultural symbolism.

Runsewe said that a powerful and fascinating merger between culture and sports showcased itself immediately after the match.

He said that beneath the pomp, glitz and glamour of the English FA final between Leicester City and Chelsea, a unique spectacular and outstanding show of patriotism was displayed, adding that it came in the manner that Ihenacho and Ndidi soaked themselves in their love for Nigeria by wrapping themselves in Nigerian Green White Green national colour to celebrate their victory over Chelsea FC.

The NCAC boss said that there is need to document, institutionalize and legalise the legacy of Iheanacho and Ndidi as a show of extreme love and indivisibility of Nigeria their country. Runsewe said he is prompted to put up a request for artistic impression of their actions on that day.

Runsewe stated that with the collaboration of the Society of Nigerian Artists, Abuja, the NCAC is instituting an art competition that celebrates the intersection of sports and culture referencing the Ihenacho and Ndidi actions with the Nigerian flag in the Leicester city victory over Chelsea Football club.

According to Runsewe the Arts competition, which will be in traditional 2D Art (painting, print making and drawing,which will be done within one month will be open to residence of FCT only for now.

Other details of the competition including assessment and adjudication will be worked out with the Nigerian Society of Nigerian Artists.

Runsewe added that they shall be a reward system for the best three winning entries that will be presented to the Minister of Information and Culture, Alhaji Lai Muhammed and to his counterpart in the Sports Ministry,Sunday Dare may include a trip to London in the nearest future

Be the first to comment on "NCAC Lauds Kelechi Ihenacho, Wilfred Ndidi For Celebrating With Nigerian Flag"