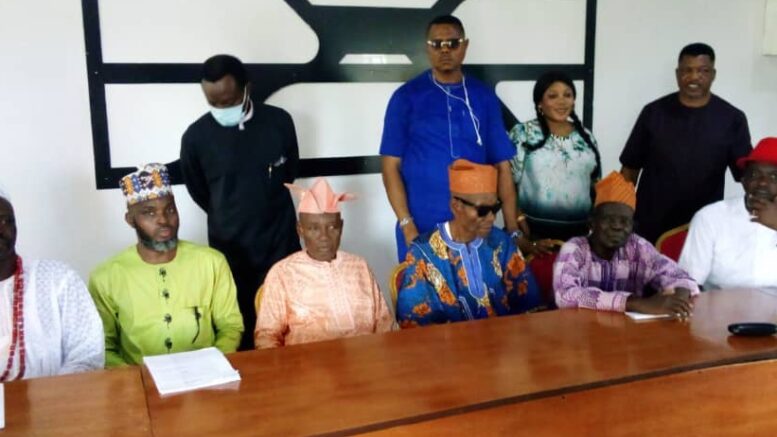 The controversy over the rights to the Power of Attorney over the estate of the late madam Efunroye Tinubu has been laid to rest, as the legal trustees of the estate endorsed the appointment of Lagoon Park Global Resources Limited as the family’s current and authentic attorney approved by the Estate’s trustees.
The family also insisted that the revocation of the appointment of their former attorney, Adamakin Investment and Works Limited and its director Akinfolabi Akindele is irreversible.
The Board of Trustees made up of its Chairman, Alhaji Adio Kassim Lumosa, Vice Chairman, Chief G O Fasetire, the Secretary, Mr. Temilola Adesanya and the Treasurer, Chief Shafiu Kassim Lumosa made this clarification at a press conference held at Abeokuta, Ogun state, recently.
The Trustees alleged that the former attorney acted improperly and was no longer working in the best interest of the family.
They disclosed that since 1955, the courts have been appointing members of Trustees for the Estate of late Madam Efunroye Tinubu, adding that the current trustees were appointed in 2002 by the high court of Lagos state Ikeja Judicial Division.
The Trustees also added that the former Attorney, Adamakin Investment and Works Limited, whose Director is Akinfolabi Akindele was appointed in August 2012 but his appointment was revoked in April 2017 over alleged fraud and refusal to render account of stewardship to the family.
They lamented that despite the revocation, Adamakin Investment and its Director, Akinfolabi Akindele still parading itself as the Attorney.
Consequently, the family states ‘’Adamakin investment and works limited and its director Akinfolabi Akindele remain revoked as attorney and shall never be reinstated an attorney to the Estate of Late Madam Efunroye Tinubu’’.
The Trustees stated that the suit filed against Adamakin Investment and works Limited and its director Akinfolabi Akindele before the Ogun state high court, was withdrawn to avoid duplication of cases as a similar suit filed before the Lagos high court still subsist adding that it would be vigorously pursued until the trustees obtain justice for the family and recover what was due to it.
The family said the police are currently investigating the alleged unlawful activities of the former attorney warning that anybody dealing with the company and its directors on behalf of the trustees is doing so at his or her own peril.
’We hereby call on Lagos State Surveyor General, Lagos state, Land registry, Ministry of Justice, Lagos state, the Inspector General of Police and the Commissioner of Police Lagos Command  to note and be wary of the nefarious activities of this former attorney Adamakin Investment and work Limited.
Share on Facebook Share
Share on TwitterTweet
Share on Google Plus Share
Share on Pinterest Share
Share on LinkedIn Share
Share on Digg Share