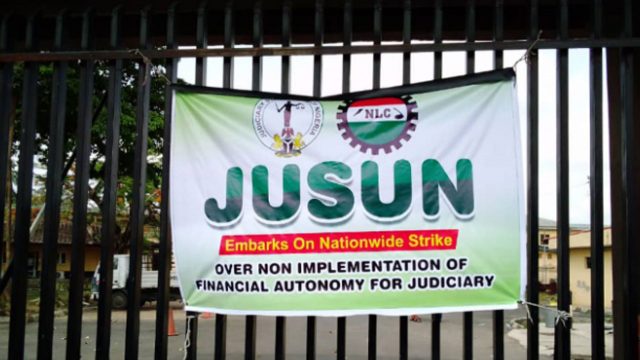 The Lagos Chapter of the Judiciary Staff Union of Nigeria (JUSUN) said it has partially called off the 16 days strike after having the meeting with the stakeholders and 70 per cent of their demand met.

Consequently, the Union through its Chairman, Comrade Asiwaju Shobowale Kehinde, disclosed that there will be ‘partial’ resumption, as their axillary demands are been speedily looked into and results are manifesting. But added that they are waiting for their National body directives on the plan.

He said the Union had many interactions on the strike situations with fellow State Chairmen, especially from southwest, Southeast and south south. Noting that it was only Lagos State Government that had show concerns and seriousness with a listening ears to JUSUN struggle.

“The union had the best assurances directly from Mr Governor and the chief judge of Lagos State on improving welfare allowances for staff which had eluded them since 2014.

“While showing commitment today with the delivery of two new buses to Judiciary while House of Assembly had only one bus given to them, even though both arms of Government were currently on strike.

“Its impossible that a State branch will suspend a National Strike, hence JUSUN  strike is very much ongoing in Lagos state.

“But Due to the great respect and honour Lagos state judiciary staff have for Mr Governor And the Chief Judge of Lagos state, its our desire only to relaxed strike rules to allow clearance of backlogs, reading of judgement and decongestion of prison occasion by the COVID-19 pandemic and End SAR protest.

“Therefore work and official duties are constraint to Wednesday, Thursday and Friday of every week, while Monday and Tuesday of every week remains our strike days that all staff Must stay off duty to observed the national strike.

All gates of courts in Lagos state will be partially open on Wednesday, Thursday and Friday only. He said the union will review the progress as event unfolds”.