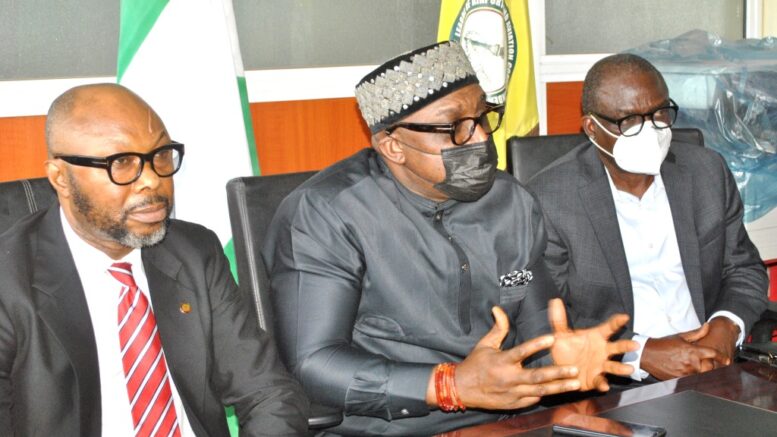 The Chairman, United Nigeria Airlines(UNA), High Chief. Obiora Okonkwo  has stated that the airline’s  medium term plan would be to consolidate its domestic operations while looking forward to actualizing  flying into the West African region.

He told the over 40 aviation journalists that  the feedback  the carrier got from the aviation market has been very impressive  and that as a result of that the airline would increase the number of airplanes in its fleet in no distant time.

“We are hoping that we should increase our air fleet very soon. We are looking at the next couple of months 2-3 months, a lot of plans are already in the way, we have been happy so far with the responses we have been getting from the market”.

On the vision of the new entrant, United Nigeria Airlines, the High Chief  is to provide safe ,comfortable and efficient services to Nigerians `
` We are glad today, it is operational, it is offering services to thousands of people in Nigeria”.

Speaking on employment, the Chairman informed that  with the commencement of flight operations by the airline jobs opportunities have been provided in different areas of  operations .

Some of the persons employed, he further said, are having between 50 to 60 per cent of their first experience in aviation after undergoing the required mandatory training.

Also speaking,  the Chief Operating Officer(COO), Mr. Osita Okonkwo, who gave the  airline’s passenger traffic since the airline commenced flight operations, said that the carrier flew  25,000 passengers, adding that the passenger load at present is 3,200 in a week.

“Within four weeks, we have done 25,000 passengers already during that period, currently we are doing about 3,200 passengers every week, ” the COO  said.

Speaking further, Okonkwo,“We have four aircraft, we could have started all the four aircraft the same day but we are an organization that is very, very deep rooted into learning and into knowing our limitations and growing into our experiences, so step by step we are creating the necessary systems, processes institutions and organs that will help us achieve the target we have set for ourselves”.

On the reasons  for skyrocketing airfare, the Chairman  attributed it to the high cost of aviation fuel which has risen from N160  per litre to over N270 , inability of airlines operators to access Foreign Exchange and maintenance of aircraft overseas due to non availability of Maintenance Repair and Overhaul(MRO)

According to him, “Foreign Exchange is a big problem, even the timing. If you look at the rules and regulations of Central Bank of Nigeria (CBN) today, they go to the official bidding and it is a bi-weekly thing, which means if you have to approach a bank, if they bid for you this week, if you don’t get it that means you need to wait for the next two weeks. As of at last two weeks, the information we got from our bank is they have not gotten any $1 allocation since February so imagine if you rely on that to make things happen. You just can’t fly.  It’s a big stress to the industry and in all these aircraft business you might take off all is well and land there is something that needs attention and any snag, you have to ground the aircraft until you find a solution.”

Speaking further, he  said, “Some seasons you might have to fly full and come back empty, and so you might have to find a way to cover the cost of the empty flights. So people should understand that operating these airlines takes a huge cost. In terms of the fuel price, it is a great thing of concern, we started this when fuel was about N160, we started operations at N160 and when you know that the cost component of aviation fuel is about 30 per cent to 40 per vent  so when you move from N160 to N270+ within a space of two months then one ordinarily should expect that minimum ticket sales will increase at least 50 per cent  especially when the cost component is 30-40 per cent

“It is a great thing of concern I don’t know what led to that but I know a lot of things in Nigeria are going up. But surely for the industry to remain operational, I am not talking about viable, certain cost components have to be adjusted and the only way you take it is through the ticketing or cargo and courier if you are doing those. There is no other way, you cannot lose your aircraft part and sell to make money. You have to make sure the aircraft are serviceable,” he said.

On the solutions to address these challenges bedeviling airline operators, the UNA Chairman said, “The solution is spare parts and some of these things are not available locally, you have to source the money and get them. I continuously advocate a special window for the aviation industry . This window can keep the airline and industry alive. I also think a support system beyond that window is required.”

Be the first to comment on "Our  Medium Term Plan Is To Consolidate On Domestic Routes—United Nigeria Airlines, Chairman"