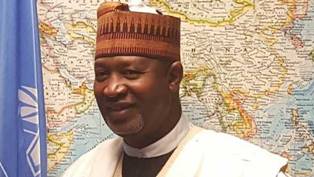 A new controversy  is brewing  over the request for the release of N2 billion made by the Aviation Minister, Senator, Hadi Sirika to upgrade already existing Airstrip at Mosan-Wasimi, Abeokuta, Ogun State in May 7, 2018 into a full- fledged passenger airport ,

The argument is coming as the Senate Committee on Aviation led by Senator Smart Adeyemi  probe into the request and alleged approval of the huge sum.

The request was contained in a document dated May 7, 2018, with the reference number FMA/DSTP/402/S.86/1/196,received by President Muhammadu Buhari on May 10, 2018 from the then Ministry of Transport and and signed by Senator Hadi Sirika, as the then Minister of State for Aviation titled, “Request for Payment of the Sum of Two Billion only Capital Support Grant for Construction of Ogun State Airport at Wasimi Abeokuta”

In the document the Minister had asked for the construction of airstrip around Abeokuta first in 2009, following the assessment report by a Ministerial Technical Team on site selection.

Sirika said that citing the airstrip at Mosa-Wasimi area of the state then among others included the facilitation of VIP movement, Border Patrol, Agro Pesticide Control and Medical Emergency Evacuation in a quest to enhance economic development of the state and to complement the airport in Lagos.

Sirika in the document stated that Sen. Ibikunle Amosun, who was then the governor of the state had requested for the upgrade of the airstrip, whose fence and design have been completed into a full-fledged international airport.

When the issue was raised at the Senate Committee on Aviation sitting, the Nigerian Civil Aviation Authority(NCAA) under the leadership of Capt. Musa Nuhu denied knowledge of the existence of a cargo airport in Wasinmi for which President Muhammadu Buhari earlier ordered the release of  N 2 billion for its construction.

Speaking further the NCAA Director General stated that the regulatory body was aware of the existence of an airport in Sagamu, despite the reading of a memo from the Minister of Aviation, Hadi Sirika on the Federal Government approval for a grant of N2 billion for the Wasinmi airport by Senator Bala Ibn Na’Allah.

The NCAA boss’ denial before the Committee generated argument among the committee members investigating  the N2 billion Presidential grant for a cargo airport at Wasimi in Ogun State.

However, Senator representing Ogun West, Tolu Odebiyi, who was the Chief of Staff to former Ogun State Governor, Senator, Ibikunle Amosun said that the proposed airport in Wasinmi was a passenger’s airport, not cargo airport, as been represented.

Odebiyi added that NCAA was carried along in the project, a position which contrary to that of the NCAA Director General , who said that the agency was not aware of any airport in Sagamu

“The NCAA was part and parcel of the project and necessary approval was sought and given for Wasinmi. It was not possible to put the agency in the dark about the project,”Odebiyi said.

As the controversy rages on about the N2 billion Presidential approval, it is however not clear if President Muhammadu Buhari granted the request,but there are fears that the money may have  been approved for the establishment of the airport .

The Director of Public Affairs,Aviation Ministry, James Odaudu, could not be reached for the Ministry’s reaction , as he did not pick his calls or  reply to the text sent to him on the  matter .