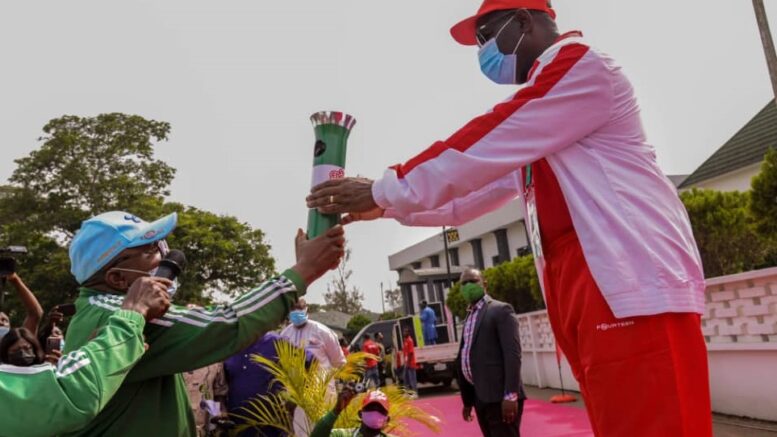 The Edo State Governor, Mr. Godwin Obaseki, has received the torch of unity for hosting the 20th National Sports Festival (NSF), tagged Edo 2020, noting that Nigeria as a country would overcome its challenges and come out stronger and better.

The governor received the torch of unity from the Secretary of the Main Organising Committee (MOC) for Edo 2020, Peter Nelson at about 3:29pm at Government House, in Benin City.

After addressing journalists and sports officials, Governor Obaseki handed over the torch to the Chairman of the Local Organising Committee (LOC) and the State Deputy Governor, Rt. Hon. Comrade Philip Shaibu, who proceeded with the torch to the Games Village. Obaseki said, “We are hosting not to make money but as patriotic Nigerians. We need to do things to heal the land as we have passed through a terrible year. Despite what we have gone through as a result of the COVID-19 pandemic, in spite of our challenges as a country, we see hope in our young people.

“This festival is important enough to encourage our youths and get them to do what they know how to do best which is sports. We also want to make a statement that we have not been overcome by this pandemic. Despite the pandemic, we must continue to do the things we need to do to keep life going.”

He continued, “For us as a country, we have come to stay as one united, indivisible entity. We have our challenges but I see this festival as a stepping stone. We would go through this stage and get out stronger and better.” “More than ever before in our history, we need to come together at this time. This is why our administration decided to hold the 20th NSF in Benin City. We are happy to receive this torch and promise to keep it alive and pass it on to the state which will host the 21st NSF,” he added.

Obaseki noted, “On behalf of citizens of Edo State and the South South, I receive this torch from the Federal Minister of Youths and Sports Development. I pass this torch to the Deputy Governor to proceed to the Games Village to galvanise our sports men and women for the festival that will be officially opened on Tuesday, April 6, 2021 by the Vice President of Nigeria.”

Be the first to comment on "National Sports Festival: Obaseki Receives Torch Of Unity"