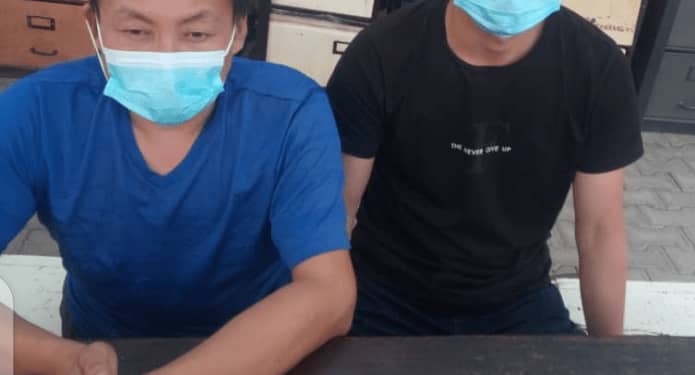 The Police has arraigned two Chinese nationals, Huzhi Neng, and Zhang Chuanhong before an Ogba Chief Magistrate Court on a five count charge of impersonation as medical practitioners and recklessly giving medical treatment to patients without licence of operation leading to the death of several victims.

The duo were arrested and arraigned by the Intelligence Response Team of the Nigeria Police after investigations.

The accused person were alleged to have between the 28th day of January, 2017 to 31st day of October 2020, at No 8, Adeyeri close, Off Opebi Road, Ikeja Lagos recklessly in a negligent manner gave medical treatment to patient’s without license of operation leading to several death of victims.

According to the Police Counsel, Nosa Watson Uhumwango, the accused perons with intent to defraud, did falsely presented themselves as qualified Medical Practitioners and thereby committed an offence punishable under Section 380 of the Criminal Law of Lagos State of Nigeria, 2015.

The defendants who were before Magistrate A.O Adigun however, pleaded not guilty to all the count charges when a Chinese Interpreter read the charges to them.

Subsequently the prosecutor asked for a trial date pointing out that the Police has three witnesses in court.

Meanwhile, the defence counsel, B.E. Lana urged the court to grant bail to the defendants on very liberal terms noting that the defendants did not abuse the administrative bail granted to them by Police during investigation period.

In his ruling, Magistrate Adigun declined the bail application while ordering the Police to transfer the case file to Directorate of Public Prosecution for legal advise.

The matter has been adjourned till March 15 for outcome of DPP advise.