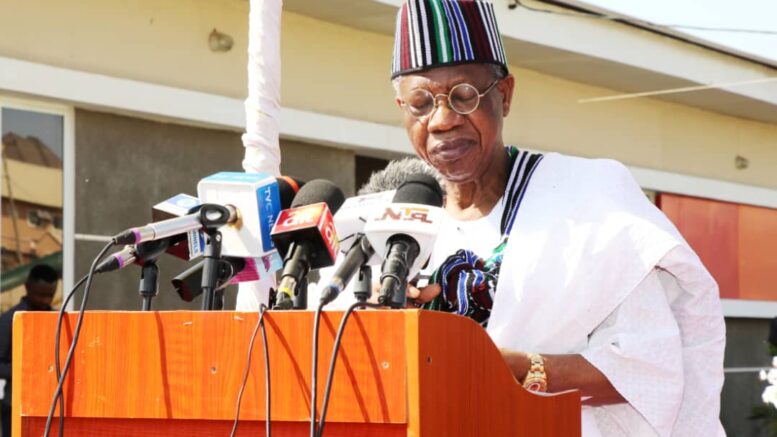 The Minister of Information and Culture Alhaji Lai Mohammed has described the successful handing over of structures and facilities to the Federal Government for the take-off of the North Central Zonal Campus of the National Institute for Hospitality and Tourism (NIHOTOUR) as promise made and promise kept by the Benue State Government.

Alhaji Lai Mohammed, who made the statement at the official handing over of the facilities in Makurndi said tourism has assumed an extra ordinary growth globally because it is a major catalyst for economic growth and social development of most countries with its attendant spiral effects along the long line of its value chain

He further said that one of the pre requisites for the tourism industry to flourish and play the desired role in the socio-economic development of the country is the availability of trained personnel to run the sector, noting that this is what informed the setting up of NIHOTOUR by the federal government with the mandate of providing skill proficiency, technical upgrading and professional based education for the hospitality, travel and tourism industries for both Nigeria and the West Africa Sub region.

The Minister,who was visibly impressed, expressed the appreciation of the federal government to the government and people of Benue state for making the desire to establish the North Central Zonal Campus of the institute a reality and called for renewed understanding between states, organized private sector and the federal government in the efforts to transform the socio-economic growth of Nigeria through tourism.

He reiterated the determination of his Ministry to develop, project and showcase the country’s tourism potentials and endowments because the benefits derivable therein are enormous in revenue generation, job creation, wealth redistribution, infrastructural development and inter-sectorial linkage incentives.

In his address at the occasion, the Governor of Benue State, Dr. Samuel Ortom, who was represented by the Deputy Governor Engr. Benson Abounu stated the resolve of his administration to tap into the potentials of tourism products and activities that the state is endowed with to grow the economy and better the social activities of the people of Benue state.

Ortom said the handing over of the magnificent edifice to the federal government for use by NIHOTOUR was informed by the desire of his government to create the needed platform for youth empowerment and skill acquisition which the training centre will offer youths of the state as well as states within the North Central Zone to grow the economy through hospitality and the tourism industry. Director General of NIHOTOUR, Alhaji Nura Sani Kangiwa had earlier in his speech stated that the dearth of needed skilled and trained manpower to run the hospitality and travel-tourism industry in the country is responsible for the stunted growth and development of the industry, adding that with NIHOTOUR in place, it has the capacity to overturn the trends for the best to develop the sector.

He said the choice of Benue state as the Zonal Campus and Headquarter of the North Central Zone of the institute was informed by the place of Benue state not only as the food basket of the country, but a tourism haven of Nigeria.

He urged the state to explore the tourism potentials the state is endowed with to grow its internally generated revenue to boost its economy.

Kangiwa pointed out the need for the state to produce its tourism development master plan which will be a guide in the appropriate development of the state’s tourism endowments in line with global best practices.