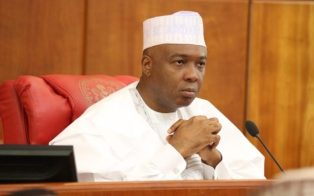 A former Controller, Finance and Account, at the Kwara State Government House,  Mr  Isiaka Kareem, yesterday told Justice Mohammed Liman of  the Federal High Court, Lagos that monthly payments to one, Abdul Adama, an aide to Saraki, was provided for in the budget of Kwara State while the former governor was at the helm.

Kareem made this known while giving evidence  in the suit filed by the Economic and Financial Crimes Commission (EFCC) before  the court  to forfeit two Lagos properties belonging to the former Senate President, Dr. Bukola Saraki, to the Federal Government.

While being led in evidence by the prosecutor,  Kareem told Justice Liman  that the  monthly payments to one, Abdul Adama, an aide to Saraki, was provided for in the  Kwara State  budget while  Saraki governor was at the helm of affairs in the state.

While being cross-examined by Saraki’s lawyer, Kehinde Ogunwumiju (SAN), the witness said as an accountant, he was familiar with the state budget and that he knew there were provisions for ‘security and contingency’, the headings under which the monthly payments were made to Adama.

He added that there was no time he made any complaint to anyone about the monthly payments he made to Adama.

While replying to another question, the prosecution witness said there was no time he gave Saraki or Adams cash and that he did not know what Adams do with the funds he collected.

The witness, who said he was in the civil service for more than 30 years said while working in Government House, said he neither had any personal relationship with Saraki nor knew anything about his properties and the source of funding them.

When he was questioned by Ogunwumiju , SAN,  on the statement he made to the EFCC, the witness clarified that it was not every month that he paid N100 million to Adama.

On this issue, he said: “The allocation to Government House was not static. It was less than N100 million when we started and it kept increasing overtime. That was why I said it was not N100 million every month”.

The witness had earlier in his examination-in-chief by the EFCC’s lawyer, Emeka Omewa, told the court that Abdul Adama was introduced to him by Saraki as his personal assistant.

He said the former governor also instructed him to pay funds captured under ‘security and contingency’ to Adama.

“Every month, when monthly allocations are disbursed, Adama will come to collect funds designated as ‘security and contingency’. In my office, we designed  a form for everyone that came to collect fund and Adama signed the form every month for the funds he collected from my office. The funds were collected between 2003 when I resumed until the governor left in 2011”, he said.

Further hearing in the matter has been adjourned to 25th November, 2020.

Recalled that Justice Liman had on June 8, 2020, ordered the anti-graft agency to bring more evidence in support of its suit against Saraki.

In a ruling on EFCC’s motion for final forfeiture of the property, the judge noted that while the anti-graft agency had made “a strong showing of strange transactions” through Saraki’s statement of bank account exhibited in court, it needed to call witnesses to prove that the funds deployed to building the houses were proceeds of fraud.