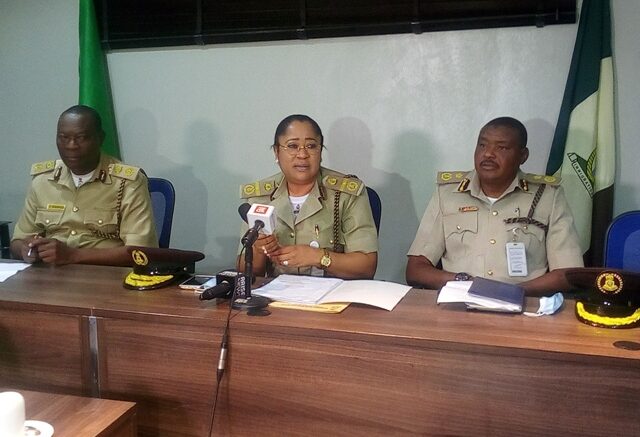 …Advises Nigerians Not To Patronize Touts

…Urges Media To Join NIS To Promote Its Activities

The Nigeria Immigration Service (NIS) has stated categorically that there is no scarcity of booklets contrary to insinuations in some quarters.

This is just as the service advised Nigerians applying for passports not to patronize touts to secure their passports.

The Assistant Comptroller General (ACG) Immigration in charge of Zone A, Ikeja, Lagos, Doris Braimah, said this while briefing journalists on efforts the service has made  to reduce human contact in the process  of securing passports and the technology deployed to make the service’s operations seamless at the  Passport office in the zone .

She explained that there is no scarcity of booklets, adding that the alleged scarcity was the handiwork of touts who want to collect money from their victims.

The ACG advised Nigerians who are applying for passports to stop patronizing touts, as they are only doing what they are doing not only to collect the money of potential applicants but to also give the country a bad image .

“We don’t have scarcity of passport booklets  and don’t patronize touts because they are very smart and in order to collect money from their victims, they spread the rumour that there is scarcity of booklets.

“Applicants should also ensure that they have their documents completed before coming to passport offices. But when you as applicant you don’t have completed form, then touts will have field day on you,

“Applicants  are advised to apply and pay online for passports to eliminate  touting and unnecessary charges by unauthorized vendors,” she said.

She pointed out that to reduce the activities of touts and make the job of NIS seamless, the service deliberately introduced technology.

Braimah noted that with the technology deployed by the Babandede led administration, applicants can stay in the comfort of their rooms and apply seamless, urging Nigerians to make use of this technology.

She however lamented that because most Nigerians are not internet compliant, they patronize touts and that further bring about human interface.

Speaking   further, the ACG stated that the zone has no power over who passport applicants patronize but that the service would continue to advise applicants to embrace technology by filling their forms online themselves to eliminate touts from the system.

She hinted that apart from the issuance of passports by NIS , Braimah said that the organisation also  issues other travel documents which according to her most Nigerians are not aware of .

The ACG said that though issuance of passports is part of NIS functions but not all what the service does.

She listed some of the achievements of NIS to include, migration from manual to e –passport, migrants registration, border control, which according to him brought about border management strategy and the introduction of several categories of visas from the five that were initially there.

All these achievements, Braimah said, are under projected, hence the erroneous belief that NIS only issue passports to eliminate human contact.

She appealed to the media to join the service in projecting the activities of the organisation, as according to her media is a very vital component to NIS projection.

Be the first to comment on "No Scarcity Of Passport Booklets—ACG, Braimah Tells Nigerians"