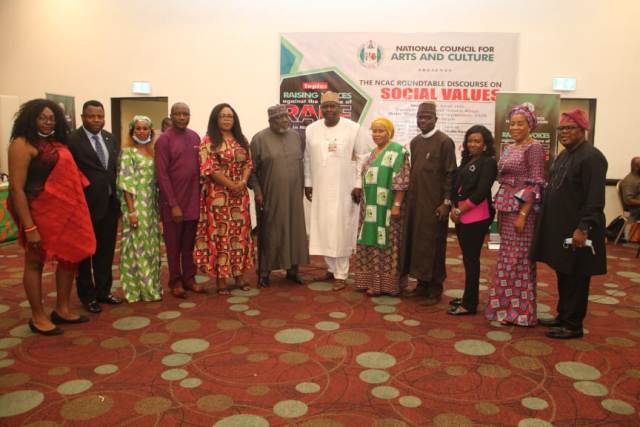 Participants at the just concluded cultural roundtable on rape and other gender based violence organised by the National Council for Arts and Culture (NCAC) have advocated for appropriate legislation with stiffer penalty to rid the society of the heinous crime of rape and return the culture of sanity, high morality and respect for sanctity of the human person.

The event which was  held at the Sheraton Hotel and Towers, Abuja was primarily aimed at raising voices against the culture of rape and other gender based violence which is gradually becoming another form of pandemic in the Nigerian society.

In his address of welcome at the event, the Director-General of the National Council for Arts and Culture, Otunba Olusegun Runsewe,said rape, which has not been part of African culture is not only a vicious crime against humanity, but a grievous sin against God.

Runsewe added that many victims of rape unfortunately end up with unwanted pregnancies resulting in the birth of children without fathers, single parentage and sexually transmitted diseases like HIV/AIDS.

He enjoined well-meaning Nigerians especially parents, religious institutions, key government agencies, gender based Non-Governmental Organisations (NGOs) to join their voices with the NCAC in the campaign against rape and gender based violence in the society.

In his address, the Chairman of the occasion, Alhaji Idi Faruk, former Director-General, National Orientation Agency(NOA) said the issue of rape is grave and should be spotlighted for national discourse as it is alien to the Nigerian culture.

He decried the law which allows only the Nigerian Police to prosecute cases of rape which often does not lead to proper convictions owing to the cumbersome process of litigation.

The Chairman opined that apart from granting victims of rape and other gender based violence the right to engage their personal lawyers, government should put in place modalities to assists victims on issues of post-rape trauma.

The National President of the National Council for Women Societies(NCWS), Dr. Gloria Shoda in her keynote address, regretted that there has been a drastic increase in cases of rape and gender based violence in Nigeria in recent times.

She noted that in addition to being raped, young girls and women who fall victim were being murdered while infants were being defiled by fathers, uncles and neighbours on daily as indicated by statistics.

The NCWS boss commended the leadership of the NCAC for providing a veritable platform to give voice to the voiceless.

She further lamented that if the trend was not checked; it has a tendency of becoming cancerous, infectious and will endanger the future generation.

She called for a proper legislation that will place severe punishment for perpetrators of this dastardly and treacherous act.

Participants at the occasion were presented with copies of a book titled, “Raising Voices Against the Culture of Rape in the Nigerian Society”, authored by the Director-General, NCAC, Otunba Olusegun Runsewe.

The occasion drew participation from critical stakeholders in the Arts and Culture Industry, Non-Governmental Organizations and related government agencies.

Be the first to comment on "Rape/Gender Based Violence: Participants Advocate Stiffer Penalty For Offenders"