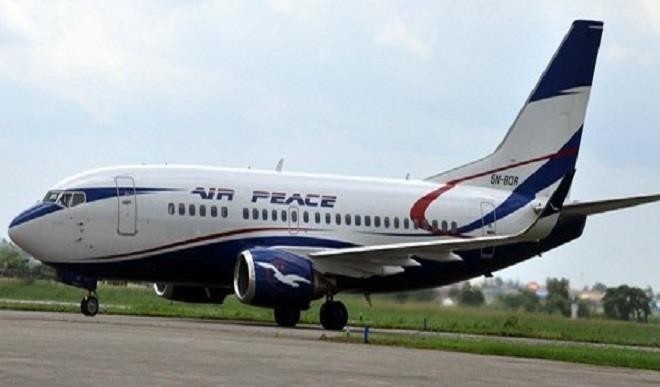 The Federal Government has commended Nigerian major carrier, Air Peace for its commitment, patriotism and for facilitating the evacuation of 584 Nigerians by engaging another airline when the British Government denied it landing right.

Federal Government particularly commended the airline for defraying  the extra cost for engaging a foreign carrier to ensure that Nigerians were brought back to the country .

In a public announcement made by Federal Ministry of Foreign Affairs with reference number No: MFA/PR/2020/16 and dated July 12, 2020 and titled, “Public Announcement to Change of Departure Date and Airport of Air Peace Evacuation Flights from the United Kingdom,” government commended the airline for the sacrifice it has made to ensure that Nigerians returned to their fatherland.

“Further to the notification issued by our High Commission in London on the pending evacuation of stranded Nigerians in the United Kingdom. The Ministry of Foreign Affairs wishes to make additional clarifications that led to the changes in the departure date and airport of the Air Peace evacuation flights. The flight was earlier scheduled to depart on 13th July 2020 from London Heathrow but was later rescheduled to 14th July 2020 from Gatwick Airport London. The changes became necessary following the unexpected decline by the British Government to grant Diplomatic Landing Clearance to Air Peace airlines.

“Consequently, the Federal Government appealed to Air Peace to engage the services of an alternative Airline to airlift our stranded citizens instead of refunding their payments, hence the use of Air Partner, one of the Global Air Charter companies advised by the British authorities.

“It is pertinent to note that, Air Peace gracefully contracted Air Partner to operate these chartered flights on its behalf at a much higher cost than the tickets fares paid by the prospective evacuees.

“In the light of the foregoing, the Federal Government wishes to extend its appreciation to the Chairman and Management of Air Peace Limited for their commitments and patriotism in ensuring that our stranded nationals in the United Kingdom return home safely. The Federal Government, however, regrets any inconvenience these changes might have caused,” the letter was signed by the spokesman of the Ministry, Ferdinand Nwonye said.

The evacuation, which was moved from July 13 to 14 July 2020 is expected to involve two flights; one flight will bring some of the evacuees to Lagos, while the other flight would take the rest to Abuja the same day.

Ironically it is the same Air Peace that evacuated over 300 Nigerians two weeks ago from the same United Kingdom, that has been refused further evacuation landing permit, but rather British government directed the airline to wet lease aircraft from UK or Europe to airlift the Nigerians

Recalled that during the lockdown Air Peace paid for the quarantine of 268 Nigerians it brought from China, including hotel accommodation and three meals a day for four days in order for the flight to take off in time from China as many Nigerians who were stranded were suffering.

As a Nigerian carrier Air Peace has made concessions for the citizens, which no foreign carrier can do for Nigerians, including the free flights from South Africa, the evacuation of Nigerians from Uganda, Kenya, China, Turkey, Malaysia, India and other countries.

In every evacuation conducted by the airline, it airlifted some Nigerians that cannot afford the fare free of charge and that was what prompted the Nigerian evacuees from India to write a letter to Air Peace, expressing their gratitude to the airline for bringing them back to Nigeria at very minimum cost and “with offer of free tickets to about 20 of the Nigerians, who went for medical treatment but did not have money to pay their way back home after being stranded for weeks.”

Be the first to comment on "FG Commends Air Peace For Commitment, Patriotism, Facilitating Evacuation Of 584 Nigerians From London"