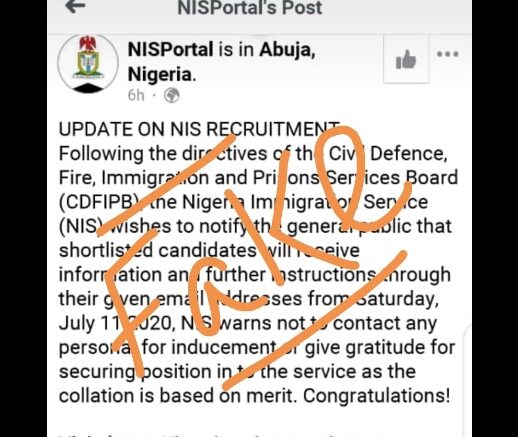 The Nigeria Immigration Service (NIS) has stated that the fake recruitment adverts in the social media did not emanate from the agency, as Nigerians are been made to believe.

An online statement issued by the service Public Relations Officer (PRO), of the agency, Deputy Comptroller of Immigration (DCI), James Sunday, explained that the organisation was compelled to issue repeated media statements and releases concerning the “Fake Recruitment Adverts”, adding that this became necessary to avert the danger of unsuspecting Nigerians falling prey to scammers, resulting into defrauding them of their hard earned monies.

The spokesman stated in the statement that in view of the aforementioned and subsequent change in their antics by posting recruitment update that has no approval of NIS and the need to alert the general public of this ugly development and criminality, the service wishes to inform the public that it is untrue.

He added that the advert is not only fake and that even the body of the update posted has a lot of grammatical errors depicting standard of a reputable service like Nigeria Immigration Service.

The service PRO said that the Comptroller General of NIS, Muhammad Babandede, has directed that the public be informed that the NIS recruitment portal has since been closed for scrutiny of submitted applications and that successful candidates will be officially notified of any development via credible means of communication, as the service has the details of the applicants as submitted by them with which to contact them.

“The public are to note and avoid fraudsters, any suspected case should be reported to the nearest Immigration Office or Police, Nigeria Immigration Service does not charge fees for recruitment in any form.

Be the first to comment on "Fake Recruitment Update On Social Media:  Advert Did Not Emanate From NIS"