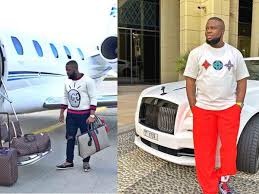 Raymond Igbalode Abbas, also known as ‘Hushpuppi’,  the alleged  cyber crime mastermind, who according to Dubai Police defrauded 1,926,400 victims  has been extradited from the United Arab Emirates (Dubai) to the United States.

This is was made known  according to statement by the Dubai Police in which the US Federal Bureau of Investigations extended its gratitude to the UAE crime unit for its role in apprehending and extraditing ‘Hushpuppi’.

Recalled that in June, the Dubai Police had arrested Hushpuppi, Olalekan Jacob Ponle, known as ‘Woodberry’, and 10 others in an operation  code-named ‘Fox Hunt’.

According to Dubai Police, “The suspects were accused of committing crimes outside the UAE, including money-laundering, cyber fraud, hacking, criminal impersonating, scamming individuals, banking fraud and identity theft.”

Director of Dubai CID, Brigadier Jamal Salem Al Jallaf said the raid that led to his arrest resulted in the confiscation of incriminating documents of a planned fraud on a global scale worth AED 1.6 billion ($ 435 million).

Dubai Police after conducting further investigations and analysing confiscated electronic devices, the organisation uncovered sensitive information mined by the suspects on individuals and companies overseas including bank accounts and fake credit cards as well as documents and files condemning the gangs’ illegal activities.