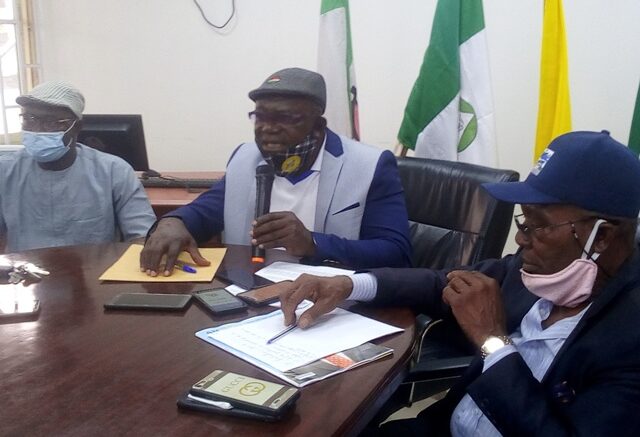 …Accuses Of Securing Fraudulent Certificate of Compliance From ICRS

These airports according to the unions apart from being the live wire of the Federal Airports Authority of Nigeria(FAAN)  also sustain all the other airports in the country.

The unions stated that the Certificate of Compliance allegedly issued to the Aviation Minister by the Infrastructure Concession Regulatory Commission (ICRC) on June 25,2020 , which purportedly confirms that the Minister has complied with all needed requirements to proceed with the process of concession for the four international airports in Lagos, Abuja, Kano and Port Harcourt was a ruse.

They added that with the Certificate of Compliance the Minister will now proceed to seek the approval of Federal Executive Council (FEC) for his proposed Outline Business Case (OBC) for the project.

The unions said that everything about the concession of the four airports have been single handedly decided by the Minister himself, and that ICRC has not carried out any due diligence on to the concession exercise.

The unions contended that if the ICRC had carried out due diligence on the matter, the Commission would have discovered wide gulfs of deception in the exercise.

“For example, while the Project Delivery Team (PDT) – which includes the ICRC  was still discussing the issue of Transaction Adviser (TA), the Honourable Minister of Aviation was on air announcing the approval of FEC of a TA and his fees. Both the TA and the fees were apparently decided solely by the Minister. Up till date, the PDT has not been allowed to take a position on the matter, its effort in that direction being frustrated surreptiously.

“Also, at the last meeting of the Project Delivery Team, in late 2019, it was decided that the airports concession issue be degraded to the bottom of the list of aviation priority projects while upgrading the National Carrier, Aviation Leasing Company, and the aircraft Maintenance and Repair Organisation for quick delivery. In addition, the ICRC was requested to provide the required components for the OBCs for the upgraded projects which the Commission promised to provide at the next meeting. That next meeting is yet to be called till date. But now, the same ICRC has been said to have issued a Certificate of Compliance (C of C) to the Honourable Minister of Aviation for the Outline Business Case for concession of four international airports. So we ask, who is fooling who? the unions asked.

For the records,the unions said the Project Delivery Team comprises of about five Federal Ministries, including Aviation and Finance and other agencies including FAAN and the ICRC itself, as well as two representatives of the unions.

They alleged that the Aviation Minister completely sidestepped the Team and has gone ahead with his own programmes as determined by himself alone, adding that as result the unions have decided to review their membership of the PDT if  public deceit and shenanigan continue.

The unions said that for now being a component part of the Team, they will completely disown any false reports of the Team there might be, upon which the ICRC might have erroneously based the issuance of the said C of C based on the fact that he  Certificate was  obtained on faulty grounds.

“Based on the above, we hereby alert President Muhammed Buhari, the Federal Executive Council (FEC), the National Assembly and the general public not to be deceived by the “celebrated” Certificate of Compliance from the ICRC and not to approve the privately assembled Outline Business Case. This outline, for reasons stated, cannot be detached from individual embedded interests and may be a self-favouring booby trap.

“For avoidance of doubt, our unions with all aviation workers, particularly FAAN workers and pensioners, will not co-operate with the concession programme of the Honourable Minister of Aviation and will use every resource at our disposal to ensure that the machinations of the few against public interest ends here. The concession of Nigerian airports in the opaque manner prescribed by the Honourable Minister of Aviation must be denied daylight so as to suffer perpetual darkness.

“In the above regard, we shall soon publish our itinerary of public nationwide protests against this unsavoury machination. These protests shall last as long as the idea to concession Nigerian airports remains alive. In furtherance of the objective, we have sought the support of the NLC, TUC and ULC for the purpose of escalating the processes of engagement and protests. Never again, with the unfortunate mistake of selling of national assets to government officials and their cronies as happened in the electricity sector, shall we allow such to happen in Nigeria. Never again,” the unions said.

Be the first to comment on "Aviation Unions Vow To Resist Concession Of Lagos, Abuja, Kano, Port-Harcourt Airports  "