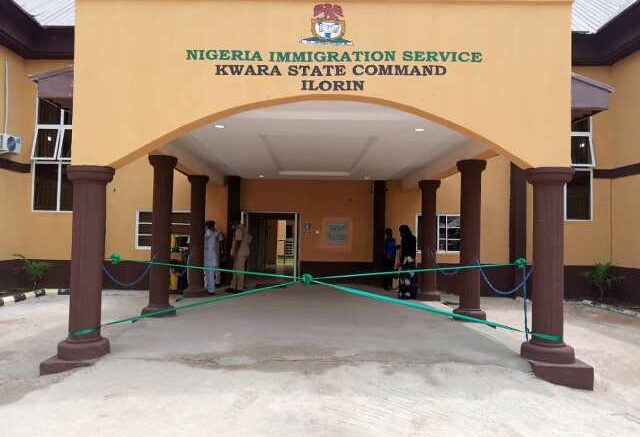 The Honorable Minister of Interior Ogbeni Rauf Aregbesola has called for a patriotic approach to the operation of the officers and men at the border flank to put a stop to the detesting word “porous Borders.”

A statement signed by the Service Public Relations Officer, Deputy Comptroller of Immigration, James Sunday, said that the Minister made the call at the virtual commissioning of the Kwara State Command of the Nigeria Immigration Service (NIS), yesterday.

This narrative Aregbesola said must of necessity change when indolence, indiscipline and corruption is addressed by imbibing President Muhammadu Buhari administration’s  policy of ensuring conducive atmosphere for investors and businesses to thrive with ease in Nigeria. The Minister spoke with the Executive Governor of Kwara State, His Excellency Mallam Abdulrahman Abdulrazak to on his behalf Commission the Kwara State Command Complex to the glory of God and benefit of humanity.

The Permanent Secretary Ministry of Interior Barr Georgina Ekeoma Ehuriah congratulated Aregbesola for being a blessing to all the services under the Ministry, as many projects were commissioned during his tenure.

The Comptroller General of Nigeria Immigration Service (NIS) Muhammad Babandede also appreciated the Minister of Interior for the support and executive approvals gotten through his good office that has made it easy for some key projects such as this to be accomplished in a short period of his assumption of duty as the Minister of Interior.