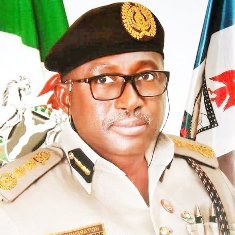 The Comptroller General of Nigeria Immigration Service (NIS), Muhammad Babandede has instructed passports offices across the country to give priority to the aged and nursing mothers while attending to matters relating to issuance of passport with immediate effect.

He gave the order today during an impromptu visit to the Headquarters NIS Passport Data Processing Centre and Passport Office, Gwagwalada, Abuja.

A statement signed by the National Public Relations Officer of the NIS, Deputy Comptroller Sunday James said the CGI was at the centre  to ascertain level of compliance with directives given to the passport officers nationwide on the NIS enhanced service delivery process and procedures aimed at meeting the public expectation and satisfaction.

Babandede, who visited the centres alongside the Assistant Comptroller General Overseeing the Passport and Other Travel Documents Directorate ACG TV Oyedeji and Comptroller FCT Command CIS Angela, directed the passport officers in the two offices to brace up as the major passport offices in the nation’s capital city.

He said that with the crowd the centres are attracting, there was need for the officers to be more innovative to women with little children and priority must be to nursing mothers and the aged members of the society.

Babandede also directed that all payments must be made through banks and or online and charged officers to maintaining social and physical distancing.

He said all passport issues must be submitted by applicants themselves and directly to a dedicated desk that takes register, record and forward the processed file officially not through any third party.

Babandede admonished applicants to adhere strictly to the improved Service process and procedures to eliminate touting, extortion and other untoward acts in the passport offices.

He said all applications for passport must be paid for online and submitted by the applicants to a desk officer at the passport offices across the country for appropriate action to be taken.

Be the first to comment on "Babandede Directs Passport Offices Nationwide To Give Priority To Aged, Nursing Mothers"