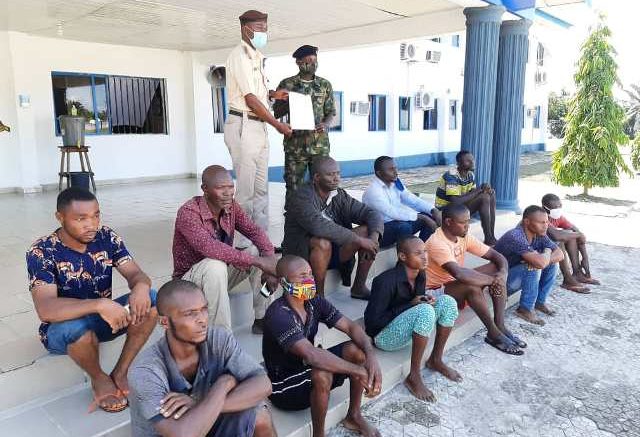 * The 10 migrants intercepted by NIS operatives and Navy

The Comptroller General of Nigeria Immigration Service,(NIS) Muhammad Babandede has ordered that intense patrol be stepped up by the operatives at the nation’s borders .

The order followed the interception of 10 Nigeria immigrants who were heading to Cameroon amidst border closure to curb communal and state to state spread of the COVID-19 pandemic by combined efforts of NIS operatives and the Nigeria Navy.

This was made known in a statement signed by the NIS, Public Relations Officer, Deputy Comptroller of Immigration (DCI) Sunday James.

The PRO also stated that NIS Commands at the border were equally directed to be more alert to movements around the border to ensure no migrant either from within or from outside the country escapes arrest, since the border closure is still in force until further directive is received from government.

Babandede, the NIS spokesman said advised Nigerians around the border communities to stop aiding the movements across the border at this period to avoid prosecution in line with extant laws of the service.

He explained that few days ago 12 Nigerians were arrested and refused departure to Cameroon from the border post in the state.

He said that two of the migrants are from Cross River while the remaining eight are from Akwa-Ibom state.

The 10 migrants, he stated were handed over to health officials for medical checks to ascertain their COVID-19 status and related ailments after which they were returned back to their localities after clearance by the health officials and profiling by the NIS operatives.