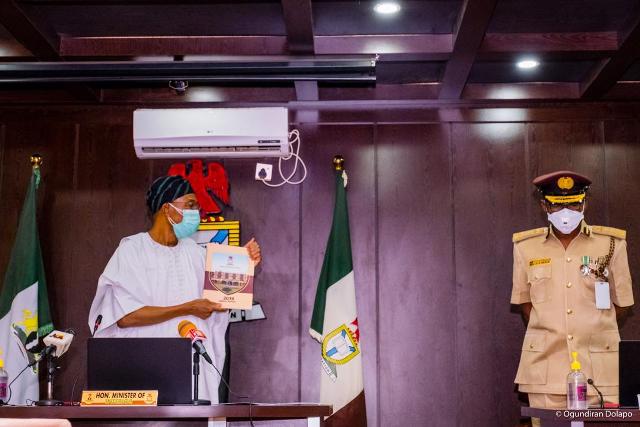 * L : Minister of Interior, Ogbeni Rauf Aregbesola and the Comptroller General of NIS, Muhammed Babandede during the public presentation of the fourth edition of NIS Annual Report in Abuja while

Minister of Interior, Ogbeni Rauf Aregbesola has stated that the Nigeria Immigration Service (NIS) made significant achievements in 2019 by implementing a number of reforms in the area of border management, passport and other travel documents, visa, migration management, human resources and infrastructure.

The Minister, who stated this during the public presentation of the fourth edition of NIS Annual Report on Abuja today, commended NIS for taking the lead in changing the paradigm of how public sector should operate in Nigeria not only in terms of publication of performance report but as demonstrated in other forward-looking and creative reforms that the service has undertaken within the period under review.

The Minister added that all NIS Annual Reports are presented as a new means of assessment, improvement, planning, retrospection, studying and management that will engender greater transparency, better decision making and improved processes.

He stated that the report was established on three fundamental objectives which according to him are in tandem with the agenda of President Muhammadu Buhari‘s administration of security; (in terms of border management, irregular migration, interception and arrest of cross-border criminals etc.), economy (revenue generation and economic growth through effective service delivery from visa, Passport and residence Permits) and transparency (openness in terms of presentation to the public)

He assured that the ministry of Interior would continue to play its part in ensuring that all agencies under the supervision of the ministry succeed in their respective mandates.

While commending the document to Nigerians, he encouraged all to go through it, as it is very significant with a lot of important data and information which are useful for national planning, decision making, research work, education and business development.

The Minister congratulated NIS for impressive achievements recorded in 2019 and urged them to do more to surpass this record in 2020.

He also urged NIS to take advantage of the opportunities of new discoveries, creative ideas and adaptability presented by COVID-19 pandemic while urging Nigerians to stay safe and observe all guidelines provided by the National Centre for Disease Control (NCDC) to combat the pandemic.

Aregbesola added that in the year under review, the Service commissioned two additional Forward Operating Bases (FOB) in Oja-odan, Ogun State and Daura, Katsina State, bringing the total number of FOBs nationwide to 12.

He also informed that the nation’s International Airports, land borders and Seaports were equipped with Border Management and Information System (BMIS).

The coverage and installation of Migration Information and Data Analysis System (MIDAS), the Minister said  was expanded at air, land and sea, adding that the  Standard Operating Procedures (SOP) for combating SOM was developed and validated.

The Minister for Interior added that in furtherance of internal control measures and migration management, the Service successfully launched the Migrant e-Registration exercise in July 2019.

Also Speaking, the Comptroller General of NIS, Muhammed Babandede said that in a bid to improve the quality of the passport and to ease the processes in line with the Ease of Doing Business agenda of the government, the enhanced e-passport was introduced and launched by President Muhammadu Buhari on January 15, 2019.

He also informed that a modern one-stop passport processing front office was commissioned at the service headquarters which would be replicated in all passport offices nationwide and that more service windows for passport and visa processing were commissioned at Tokyo, Japan and Seoul, South Korea.

He listed other achievements to include construction of access roads, new central store, main entrance gate and pavilion at NIS headquarters as well as Transit Camps at border areas and designated formations.

He revealed that works are progressing in other 50 other projects that have reached 80 per cent completion across the country including the Technology building and auditorium at NIS Headquarters.

Be the first to comment on "Aregbesola Commends NIS For Implementing Reforms In Passport, Visa, Migration Mgt, Other Areas"