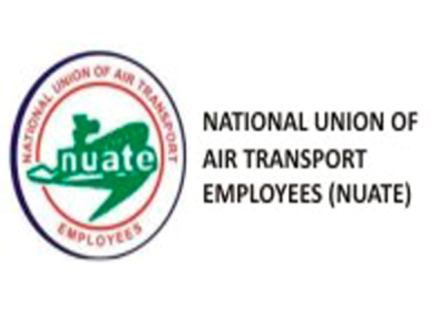 …Says Fight Against COVID-19 A Collective One

The National President of the National Union of Air Transport Employees (NUATE), Comrade Ben Nnabue has appealed to the agencies in the aviation sector to exhibit the human feeling in them as Coronavirus continues to ravage all facets of human endeavor.

Nnabue, who  made the appeal in  his May Day address to the workers  today, said that though workers are not unaware of the tragedy the COVID-19 has caused but urged these organisations to ensure that workers income are paid continuously .

He added that so far majority of the organisation in the sector has shown appreciable understanding of the plight of workers, calling on others to do the same

According to him, “We have appealed to the managements of all our partner organisations to allow the humanity in them come afore at this time of human tragedy. We urge them to deep hands into their sinking funds and assure continuity of income for their workers – you, our members. We sincerely hope they understand with us and mitigate the catastrophe that could befall workers should they have to suffer the double jeopardy of the lockdown and significant or total loss of income. We are pleased that so far, the majority of our host organisations have shown substantial understanding. We urge the few odd ones to quickly adjust and tow the path of positive engagement. We are confident that the spirit of true partnership we have successfully built at this period will assure that we pull through this difficult time together, with all the companies and our members intact.”

The NUATE scribe also appealed to organisations, whose staff are engage in essential services, and who have to risk their lives and strain their meagre resources to find their ways to work under high transportation costs, to pay commensurate palliatives/incentives as a matter of necessity, stressing that this is the least the organisations can do.

Speaking further Nnabue stated that NUATE had equally appealed to the Federal Government to support agencies in the aviation sector to prevent them from going under considering the fact that the aviation industry is the worst hit by the COVID-19 pandemic.

Failure to intervene by the government, he said would lead to the collapse of these organisations, hoping that the government will listen to the union’s plea.

“We have equally appealed to the Federal Government to come to the aid of aviation companies and agencies. Our industry, being about the worst hit by the pandemic, runs a very high risk of total collapse without government intervention or bailout, in one form or another.

“We therefore hope that Government will not only listen to our plea but will accord priority and urgency to the aviation sector in respect of the expected intervention. In this regard, we expect also that the handling of workers welfare will play significant role in the extent of access by the companies to the bailout measures. “

The National president stated that since this year’s May Day is an unusual one the union would be sensitive to the trying times and not delve into hard core trade union matters but he however assured union members that, “NUATE, is well and fully alive to its responsibilities and commitments to you, our esteemed members.

He paid glowing tribute to   the late Comrade Abdulkareem Motajo, the erstwhile General Secretary who died recently and prayed that his memory remain blessed.

Motajo, he said was an international trade union colossus, who according to him NUATE was blessed with, adding that his infectious friendship, vast knowledge and experience, coupled with principled pragmatism brought NUATE into national and international prominence and respect.

In his words, “We are extremely sad that we had to lose him when we had still so much to benefit from his native intelligence and unifying spirit. As we acknowledge his immense contribution to NUATE’s standing in the commit of trade unions worldwide, and the tremendous impact he had on the welfare and wellbeing of our members nationwide through his astute negotiation skills, we nonetheless bow to God’s wish and bid him farewell on his onward journey home. We pray for peace between his Soul and his maker. And may our merciful God grant his family and friends succour and provisioning. Amen.”

On the fight against the dread pandemic; Coronavirus, he said, “The only way to get our lives back to normal is to defeat the virus. And the only way to defeat the virus is for all of us to work together. The citizenry, the governments at all levels, and the global community must join forces and combine efforts and move in the same direction. For this to happen each and all must play well their parts. In this case, the responsible role for us to play as good citizens is to comply with all rules and guidelines issued by all governments and their appropriate agencies.”

Be the first to comment on "MAY DAY: NUATE Appeals To Aviation Agencies To Exhibit Humanity, Ensures Continuous Payment Of Workers’ Income"